Figure 1 shows the average weighted price across the five seasons to 2020-21 by half micron for eastern merino fleece within a length range of 70-95 mm, with vegetable fault less than 1.6%, a yield above 64%, P certificates only, point of break in the middle between 20 and 80 and no subjective fault such as cott or colour. The average staple strength tends to be around 38 N/ktx for this series.

In Figure 2 the effect of staple strength, compared to a base fleece price with a staple strength of 35 N/ktx, is shown for 19 and 21 micron fleece. There are a couple of points to note. Firstly discounts below 20 N/ktx and premiums above 40-45 N/ktx level out. For 21 micron there are few premiums for high staple strength at all, a feature which applies to the broader merino categories generally. The second point to note is the relatively small premiums and discounts recorded. They are not very large.

Staple strength is nowhere near the terror of the market it has been in the past although a staple strength around 38 N/ktx tends to be the threshold for access to RWS premiums and some specialist Italian contracts in the current market, but achieving these prices depends on more than staple strength. There are some implications for breeding indices and the value put on staple strength due to the lesser impact on price when staple strength exceeds the 20 to 40 N/ktx range. 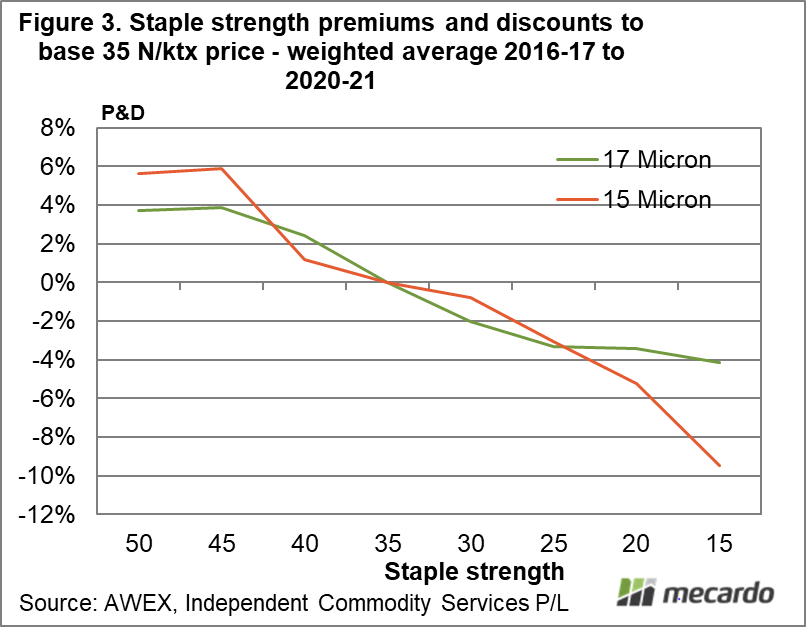