Bargains in the west, but will stocks last?

Western Australia’s ‘hard border’ restrictions in place for most of this year may have stopped holidays (and test cricket) from heading to Perth, but it sure hasn’t halted the flow of sheep from west to east. It’s no secret that producers with drought depleted sheep flocks on the eastern seaboard have been hauling all categories of sheep across the Nullabor this year, taking advantage of the drier seasonal conditions being experienced in WA this year.

A record 1.36 million head of sheep were transferred from WA to the Eastern States for the 2019/20 year, while close to 200,000 more were sold the same way from July to September.  Anecdotally this trend is continuing, but the availability will surely slow at some point.

How is this impacting prices? Let’s look at ewes first. The WA mutton indicator is currently trading at 484¢/kg, which compares to 650¢/kg for the Eastern States mutton price – a significant difference. It means a 24kg ewe (carcass weight) will fetch you $116 in WA, and $156 in the east. If we price freight at $35/head, it’s still cheaper for those with plenty of feed to look to the west for restockers. The price divide is just as keenly felt in the store setting. Last month, 1.5-year old Merino ewes sold to a top of $382 at Jerilderie, NSW, and at Jamestown in South Australia the same product topped at $361. At the Corrigin and Wickepin, WA, sale, they topped at just $252.

For lambs, the story is much the same. The Western Australia Trade Lamb Indicator (WATLI) averaged 622¢/kg for October, compared to the 790¢/kg average of the Eastern States Trade Lamb Indicator. The ESTLI was pretty much on-par with last year’s October average (789¢/kg), but the WATLI had dipped the same month in 2019, when it averaged 650¢/kg. That said, all WA sheep indicators are currently trading at above year-ago levels, with restocker lambs at the biggest premium of 85¢/kg higher year-on-year. Live export is obviously an important market for WA, which contributed 97 % of all sheep exported live from Australia in 2019, taking a large portion of the Merino wether lambs produced in the state and influencing prices. And while export volumes for July to September were down by nearly 10,000, for the year to September they were 12% higher year-on-year.

There’s still opportunity to purchase good quality restocking sheep from WA if you can fill a truck heading east – but how long can both supply and demand last? The latest AWI/MLA sheep survey, completed in June, showed WA as having the largest breeding ewe population in the country, at 5.7 million head, with 97 per cent of these being Merinos. While not all of the 1.55 million turned off to the east already this year were breeding stock, it’s still a fair percentage of the total flock. However, with the rainfall forecast not improving for WA, and ewes only getting dearer in the eastern states, there could be a few more trucks heading across the Nullabor yet. 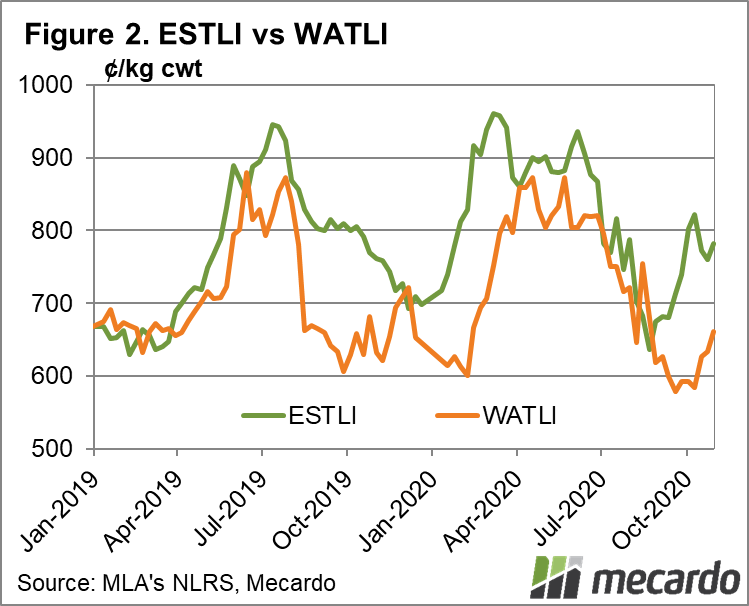