The new year has started with a focus on domestic lamb consumption, as Covid-19 impacted processing and freight leaves some shelves short on meat and the latest Australia Day lamb marketing campaign hits the airwaves. As we wait to see what impact availability and restrictions has on both how much lamb Aussies eat this summer and how it flows back to producer returns, the final month of 2021 data is in for lamb exports.

Total lamb exports for the year finished just a fraction higher than 2020, at 264,633 tonnes. While this was below the estimated 6% rise from Meat and Livestock’s latest outlook, it was still up 1.5% on the five-year average. Both November and December lamb exports rose compared to the previous month, but remained below both year-ago and five-year-average volumes. While total lamb export volumes are down on the new highs set in 2018 and 2019, it is important to note that it was still the third highest level of exports on record.

The US has been the story of the year for lamb exports, with Australia their biggest lamb supplier and US lamb imports of Australian lamb up 26% for the January to October period. According to the Steiner Group, US lamb imports from Australia were 165.6 million pounds (751.1 million kgs) for January to October, compared to their domestic production of 100.6 million pounds (456.3 million kgs). And Australian lamb accounted for over half of all lamb consumed in the US in that period. Monthly local data shows lamb exports to the US finished 2021 up 13% year-on-year, and the US market share of Australian lamb exports lifted from 23% to 26.3%. US lamb production was back 2% for the first 10 months of 2021, and cold store inventories remain well below year ago levels, as well as more than 20% below the five-year-average – indicating demand shouldn’t waiver in 2022.

Mutton export volumes were down 6% for the year, on par with 2016 levels, making them the two lowest volumes in the past nine years. The slowdown in exports to the Middle East is behind most of the decline, with its market share falling from 15% to 11%. China imports of Australian mutton were down just shy of 3% year-on-year, but they took 1% more of the market share, and volumes remained nearly 9% above the five-year average.

Consistently high prices didn’t deter the desire for Australian lamb in 2021, and with few international competitors on the market and a growing flock, the outlook for 2022 is positive. The US has been in the spotlight this year, China remains a good customer, taking 24% of the market share and their third highest volume on record. The latest lamb export value data available only runs to October, but it looks set to be at least on par with the previous year. 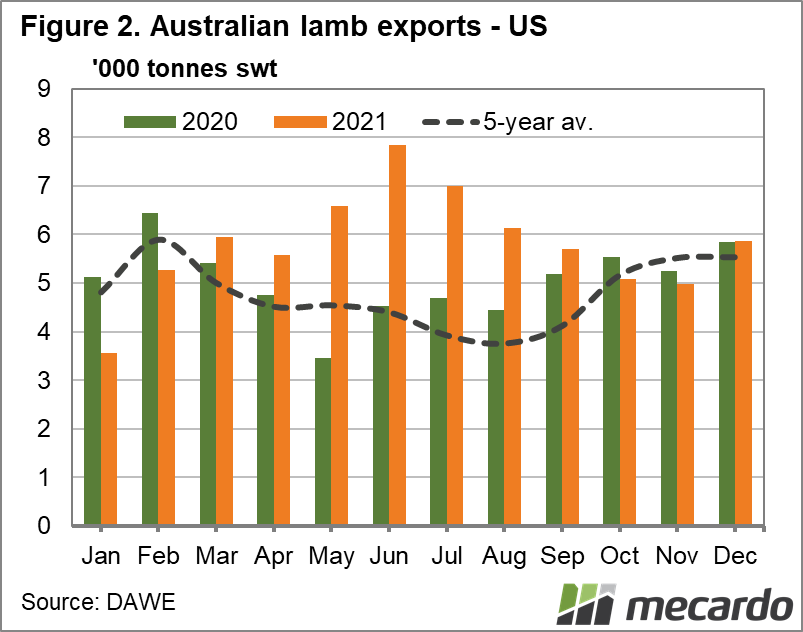