A domestic heavy lamb price 287ȼ/kg higher than this time last year hasn’t put the brakes on overseas demand, with export volumes tracking higher year-on-year. National lamb slaughter for the year-to-July is up 10%, shoring up supply for export customers, who don’t seem to be baulking at strong prices. Mutton slaughter has fallen 5 % for the year-to-July, while exports are back 8%.

Lamb exports are 4% higher for the year-to-date compared to 2020, with more lamb exported in July than ever before in that month. July exports, while slightly lower than June’s totals (also a record for that particular month), were 27 % above the five-year average. And the total year-to-July volume of lamb sent offshore is actually the third-highest on record, with Australia only exporting more in that same period in 2018 and 2019.

The US remains a key component of the lamb export equation, with their July volume 44% above the five-year average. After importing a record amount of Australian lamb in June, the July figure did drop 11 % month-on-month, but the US has overtaken China in market share, receiving 26.5 % of Australian lamb so far this year. According to the latest Steiner US lamb report (released last month), domestic lamb production in the US is expected to be down 4.4% during the second half of 2021. They also expect total lamb imports to fall towards the end of the year, which will mean a “double digit decline in supply availability”, pushing their wholesale and retail prices even higher. This comes as the US domestic lamb cutout value in mid-May was 26 % higher year-on-year, and imported Australian fresh/chilled lamb prices had also risen by 26 % in early July.

Mutton exports remain constrained by domestic supply, and are 8% lower for the year-to-date compared to 2020, and 26% lower than the same period in 2019. That said, July exports were higher year-on-year, and moved back to within 3% of the five-year average. And export values for mutton are only back 2% for the year-to-June. China is making up a majority of the Australian mutton market share at 40% (compared to 28% for January-July last year) and has consistently imported high year-on-year volumes since February. The US has also increased their liking for Australian mutton this year, importing volumes higher than the five-year average since March.

Despite higher export volumes for Australian lamb, the export value for the year-to-June has fallen 3% on 2020, and 7% on 2019. This isn’t necessarily a negative, however, as it could indicate that as our customer’s economies continue to recover from Covid-19, there will be money in the budget for more Australian lamb, even at current prices. 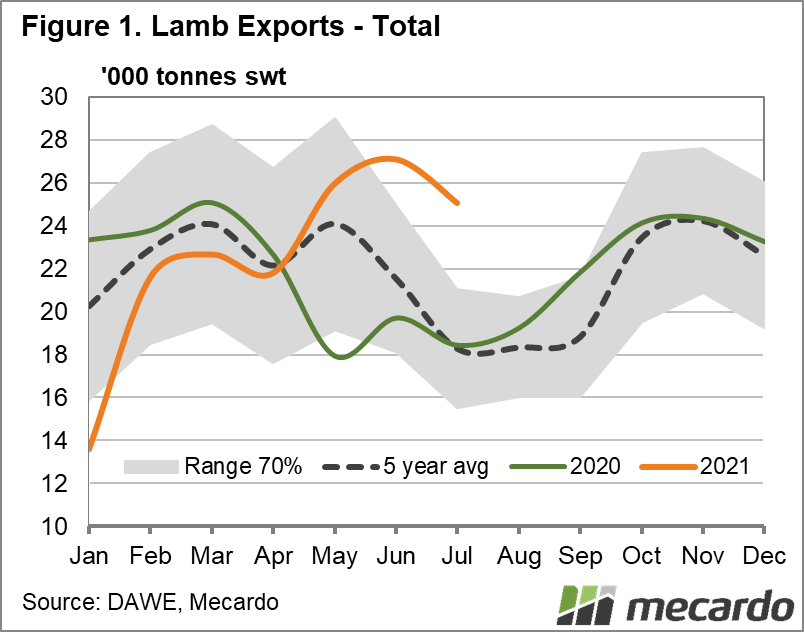