Keeping up with the lamb market at the moment is about as difficult as keeping track of how many mates you can have over for dinner. And much like Covid-19 restrictions, it is dependent on where you live. This week’s opening eastern states lambs indicators were anywhere between 2¢/kg and 52¢/kg higher week-on-week, while all but the restocker category continue to trade at a significant discount to the same time last year – between 55¢/kg and 198¢/kg down. If we look State specific, however, it’s a tale of two different kinds.

With it announced this week Victoria’s meat processing sector would soon operate at just two-thirds of its workforce capacity, there is sure to be more pain for that end of the supply chain, and further impacts felt by the industry as a whole in coming weeks and months. More on this here.

Victoria has already felt the impact of Covid closures, processing 50,000 less lambs for the last week of July compared to 2019. And the saleyard trade lamb indicator in Victoria has fallen 139¢/kg year-on-year as a result, to 714¢/kg. Reaching 938¢/kg at the beginning of June, the price has been on the decline ever since – not an uncommon occurrence as new season lambs hit the market, but one that has come a good month earlier this year.

If we look to Victoria’s lamb numbers for July (latest figures July 28) it indicates supply isn’t the downward driver, with just 72,755 going through the yards – 61 per cent less then the previous month, and 58 per cent below July 2019.

To the north, NSW processors have picked up the slack, processing nearly 20,000 more lambs for the last week of July. But despite reports of plenty of early suckers being sold already, lamb yardings were also down in NSW for the month – by roughly 30 per cent. After zig-zagging its way through July, the NSW trade lamb indicator finished July on 796¢/kg, a drop of 34c/kg for the month – but still a long way north of the Victorian indicator (714¢/kg, remember).

The grass-fuelled early sucker season in NSW may start to push prices south sooner rather then later, especially as the heavy lamb indicator continues to trade at a substantial discount to trade lambs, giving producers little incentive to grow lambs on. Victoria’s flush of new season lambs comes later in the season, but their processing slowdown will be pain enough. Luckily lamb prices are still at historical highs, because it looks like they are only going one way from here. 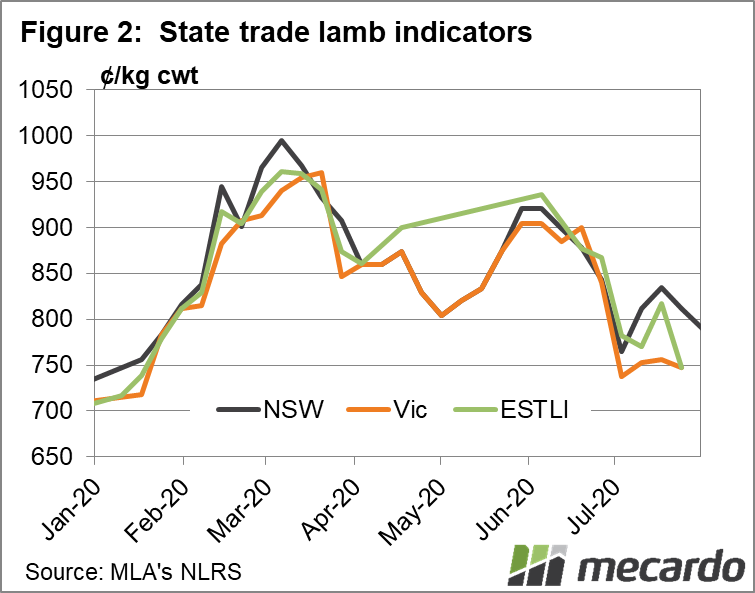