Mutton money keeps on keeping on

Mutton has remained the shining light in the sheep market this month, as the only category trading higher year-on-year. Lamb is still trading at historically strong levels while being down on last year, but mutton’s where the money has kept climbing.

If we look at the national over the hook mutton indicator for the year to date, it has averaged higher every single week for medium 18-24kg sheep. This equates to them being the highest on record for that period. That indicator currently sits at 553¢/kg, and hasn’t dropped below the 500¢/kg mark since May last year. The heavy sheep (24kg+) indicator is in the same boat, and has been trading at an even higher premium year-on-year for 2020. This week it’s 550¢/kg.

The national saleyard indicators tell a similar story– at least up until July. Mutton has been trading at it’s highest recorded levels for that period of time – keeping in mind Covid-19 caused a gap in indicators from March 26 to May 28. The past three weeks, it has slipped below year-ago levels, currently 587c/kg, which is 10¢/kg below the same week in 2019. A comparison with better perspective however is perhaps the five year average for the corresponding week – 365¢/kg.

In the eastern states, the mutton indicator has dipped 48¢/kg in the past month, to 596¢/kg, but still trades 15¢/kg higher year-on-year. In comparison, the Eastern States trade lamb indicator is down 115¢/kg compared to the same week in 2019, and the heavy lamb price has dropped 236¢/kg.

So why the demand for mutton? To start, the much improved seasonal conditions in many sheep production areas has led to a significant fall in supply – close to 900,000 less sheep have been slaughtered nationally for the year to May (latest figures available) compared to 2019. As an aside, those same seasonal conditions have helped lead to the highest recorded sheep carcass weight for the year-to-May, at 24.41kg. Anecdotally, the number of ewes scanned empty that have headed back with the ram instead of onto the truck in the past six months is significant.

Covid-19 impacted meat processing closures have limited competition in recent weeks, but the simple supply and demand equation for Mutton is set to stay in the favour of the seller for the immediate future. Next time we will have a look at the supply side, and how a pandemic impacts consumer purchasing power. 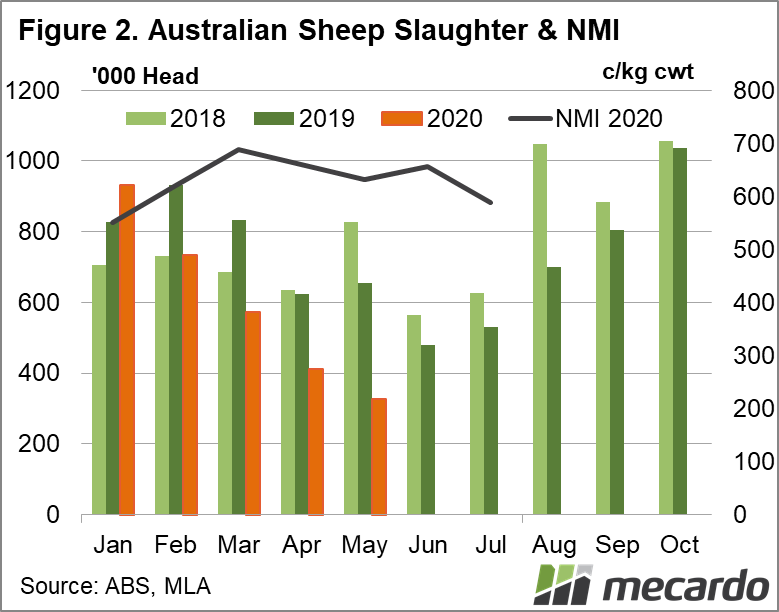