Lamb prices this week were trimmed back by what has probably been a substantial increase in supply to the saleyard, and prices largely went south as a result, with the Merino lamb category copping the lion's share of the damage, and carnage in the WA markets.

Last week’s yarding’s data revealed that lamb supply was dramatically weaker, with a substantial drop in lamb numbers of 25% being clocked up, down to 127,585 head.

The fall was almost exclusively driven by NSW where numbers fell 37% week on week from their unseasonably high level of 116,180 head a fortnight ago, which was 13% above the five-year average. That said, the drop was not unusual, as NSW yardings have been following a volatile yo-yo fortnightly pattern all year. The volume of sheep brought to market also decreased 7% week on week to 53,371 head.

Indications are that yarding volumes this week have lifted substantially, as the sneak peek indicators of the ESTLI eligible yarding, and heavy lamb yardings respectively lifted 33% and 44% from last week’s levels.

Both lamb and, particularly, sheep slaughter lifted sharply last week, respectively booking an 11% and 21% week on week gain. Slaughter levels for both lamb and sheep have snuck over the five-year average mark, tentatively suggesting that capacity in the industry has probably strengthened after a horror period of disruptions and labour shortages.

On the eastern states categories, prices all trended south this week, with no winners. Merino lambs were awarded the wooden spoon, clocking in a 29¢(5%) decrease to 680¢/kg cwt.

However, on an encouraging note, since most east coast categories lost less than 1% this week, the market could still be described as resilient.

Over the last month, Merino prices have slipped a total of 52¢(7%), with Restocker lambs and Mutton not faring much better at 4% & 5% falls respectively.

Although the downward price trend in sheep & lamb is continuing, demand in the market is still showing signs of stoic resilience as falls are happening at a relatively slow pace. Historically, over the next few weeks, supply into saleyards tends to increase, but, unfortunately, it’s also a quieter period on the slaughter front. With a lot of lambs still out there from last season, it’s looking more likely that the next few weeks might be lacklustre at best. 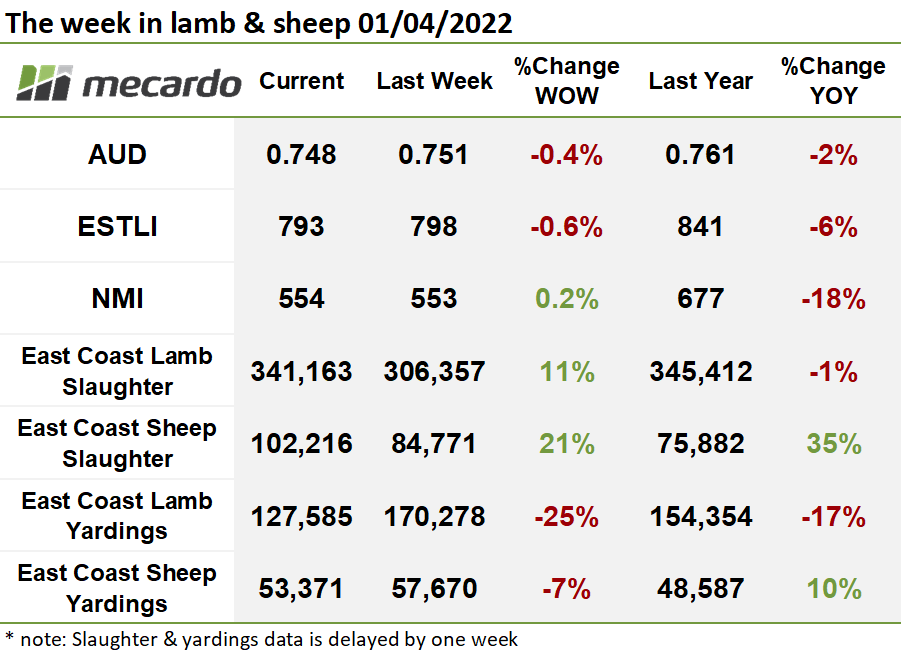