While it’s rare to look into any red meat export focused topic without at least a passing mention of China, it tends to be in a piece-meal fashion. Australia will soon go to the polls for a federal election, and it seems both options for Prime Minister are keen to show they aren’t happy with the powerhouse of the east, and for many a reason. However, they remain an important trading partner especially for sheepmeat and beef. So how has Australia been fairing lately in the competition for China’s protein business?

When we looked at China’s meat needs last year, they were still grappling with the dip in domestic pork production caused by the African Swine Fever breakout. But it has been reported that it didn’t take them long to rebuild, with domestic pork production up 29% from 2021, causing total Chinese meat imports to drop 5.4% year-on-year, according to Reuters. The United States Department of Agriculture expects China’s domestic meat supplies to reach 79 million tonnes, taking it higher than pre-ASF breakout.

China kept its title as the largest importer of sheepmeat in 2021, receiving 372,000 tonnes in total from Australia. To put this in perspective, in second place was the US, which took well under half of that volume at 115,000 tonnes, followed by the UK with 43,000 tonnes.  Australia was the largest exporter of sheepmeat, with the value of its business rising more than 5% to $3.96 billion, according to Meat and Livestock Australia. However, China didn’t take the highest volume of Australian lamb in 2021 – the US did, taking back the top market share position for the first time since 2018. Australian lamb exports to China did rise last year, though ever so slightly.

Total mutton exports out of Australia fell 6% in 2021, predominantly due to availability, but shipments to China specifically only lost 3% year-on-year. And China actually increased its market share of Aussie mutton (albeit by just 1%) to 41%, which is the second highest market share it has held, behind the 45% set in 2019. This said, neither mutton nor lamb is off to a great start so far in 2022, with total sheepmeat volumes headed to China in the first two months of the year down 18% year-on-year.

Australian beef – again impacted by low supply – didn’t fare as well when it comes to the Chinese market last year, with 25% less product headed to their ports, and China again dropping back to its lowest market share since 2018. This year has started off strongly though, with Chinese market share climbing back above South Korea for the year-to-date (putting it in second place behind Japan) and only being back 3% year-on-year. The USDA is predicting total Chinese beef imports to rise 10% in 2022.

Current global politics have only heightened tensions between both China and Australia, and China and the US whilst Chinese officials suggest they are focussed on renewed domestic production to ensure food security. Australian red meat product has showed significant resilience so far in the face of trade arguments, low supply and high prices, but it will be something to watch throughout the year.

China has few options when it comes to sourcing its sheepmeat, not the case with beef however, as Brazilian beef is allowed back into China after its 3 month BSE-case ban –  they are expected to be the big trade winners from any China-US standoff to come. 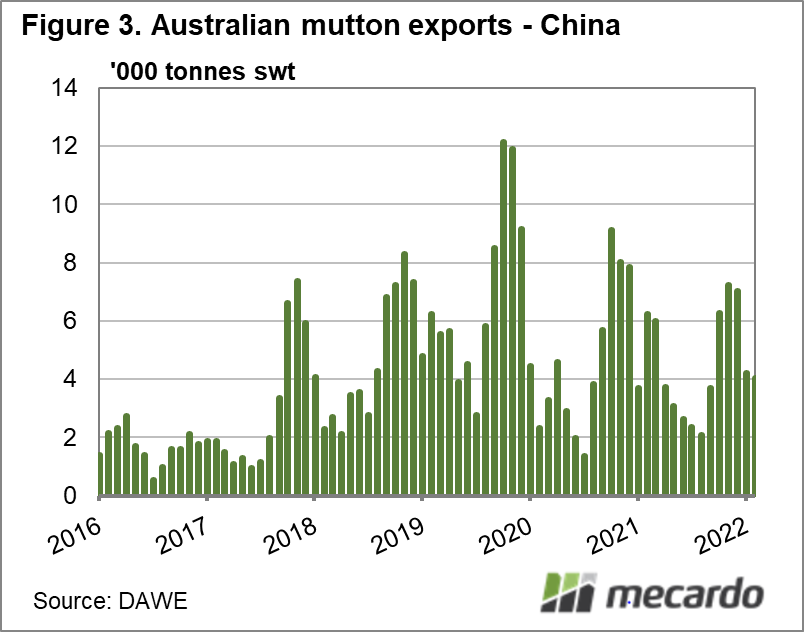 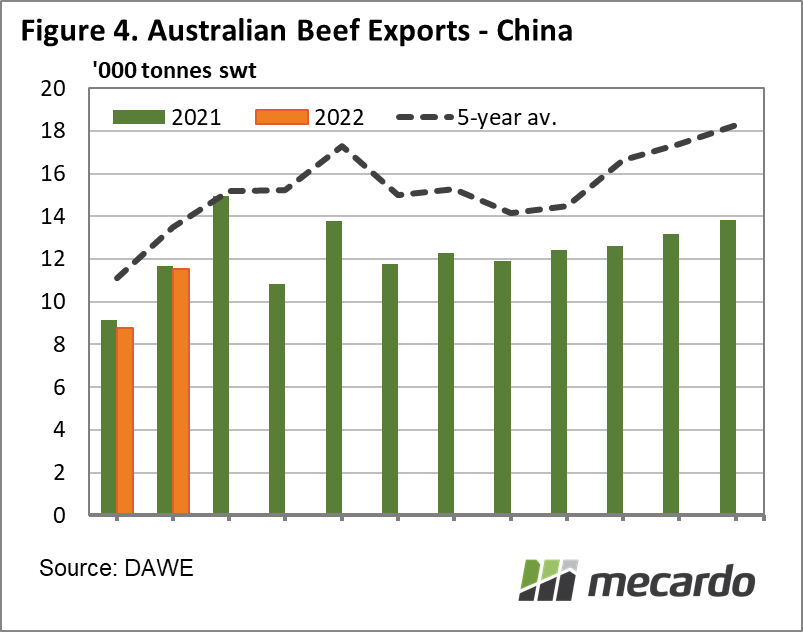