Big week for lamb, but not at the yards

The Australia Day public holiday might be lambs time to take centre stage on BBQ’s across the country, but they were certainly missing from the yards. The latest supply data gives us saleyard throughput for the week of the public holiday and even considering the typical drop in numbers, we’ve never seen yardings this low at this time in the season.

While yardings always drop due to the public holiday in the last reporting week of January, just 71,233 head of lambs were sent to the yards, which is 30% lower than the same time last year. All states contributed to the light saleyard throughput for sheep and lambs.

For the week ending the 28th of January lamb slaughter lifted by 2.5% to see 282,981 lambs processed in the east. This was only around 3% below the level of the same week in 2021, but it’s tallying up the year to date slaughter where we get the picture of how slaughter capacity has been impacted by the workforce disruptions. Comparing the last four weeks of slaughter to the corresponding weeks in 2021, 16% fewer lambs have been processed so far this year. Comparing to the five year average it’s an even more stark difference of 26%.

70,307 sheep were processed in the east last week which was down slightly on the week prior. The total number of sheep slaughtered in the last four weeks is 25% fewer than the same period last year.

Much of the movements in saleyard prices this week were corrections on last week. The Eastern States Trade Lamb Indicator fell 10¢ to 843¢/kg cwt. The National Restocker Lamb dropped 13¢ after last weeks 32¢ gain. Most categories fell significantly in NSW, with trade lambs down 57¢, but Merino lambs were the strength with a 66¢ lift to 828¢/kg cwt.

The market was more mixed and less dramatic in Victoria, where Heavy lambs improved 23¢, and there was little change in Merino and Trade lamb prices. Mutton continued to receive support with the National Mutton Indicator gaining 10¢ over the week to 592¢/kg cwt.

As we reported in this week’s analysis, the export market demand outlook is very positive and price supportive. On the domestic front, how long slaughter capacity & therefore processor buying activity will remain subdued is the unknown, but with the Omicron peak estimated as passed, we can hope that it will be less of an issue in the weeks ahead. 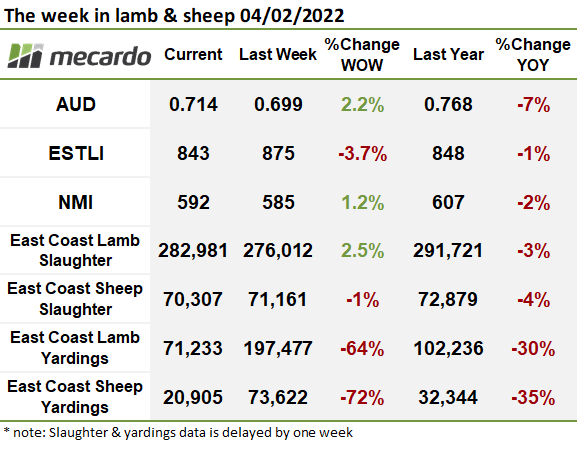