Cattle and Ovine slaughter heading back to levels of a fortnight ago.

One of the big announcements regarding the slowing of the Victorian Covid spread, and the economy, was cuts to meat processing capacity. The experience in the US earlier in the year brings the worst-case scenario to mind. Scenes of backing up livestock and meat shortages are quickly brought up. In terms of impact on livestock prices or meat availability, we’ve already seen cuts of this magnitude in sheep and cattle, so changes shouldn't be too drastic, for now.

A fortnight ago, when ALC and Midfield joined JBS Swift in closing livestock processing plants, there was concern surrounding livestock prices and meat supplies.  The closures did have an immediate impact on livestock numbers slaughtered.

Figure 1 shows that sheep and lamb slaughter in the week ending the 24th of July had already fallen by 37% from the numbers processed in the first two weeks of July.  Slaughter was down 43% on the same week last year and 63% on ‘full capacity’ seen in December last year.

Last week sheep and lamb slaughter bounced back, but was still 10% below early July, 15% below last year and 47.5% below the December peak.

Victoria does normally process the most lambs in the country, but we’ve already seen NSW pick up some of the slack in lamb slaughter, and sheep for slaughter are in historically very tight supply.

In terms of lamb supplies, domestic lamb consumption in 2019 came in at roughly 7.5 million head, or 624,000 head per month.  On a weekly basis, Australian’s consume about 156,000 head of lamb.  You could cut Victoria’s kill to nothing, and last week the rest of the east coast would have processed 165,000 head.  Domestic supply should be adequate, exports will no doubt suffer though.

Victoria has a much smaller share of the national cattle kill, processing only 19% of the east coast kill for the year to date.  Cattle processing also took a big cut a fortnight ago, mainly due to Midfield closing while JBS Swift was still shut.  Figure 1 shows the dramatic fall in slaughter, totalling 30% on the second week of July.  Last week cattle slaughter re-gained most of the lost ground, but still sat 20% below the same week last year, and 35% below the December peak.

The big fall in Victoria a fortnight ago only equated to an 8% fall in east coast slaughter, which was already running well below capacity. As such, there is little issue with backing up of cattle, or tight domestic beef supplies while Victorian facilities run at reduced capacity.

There is likely to be problems for individual facilities in supplying ongoing export demand for beef, with the prospect of losing market share to processors in other states one of the issues which will be faced.

The new rules will likely see Victorian livestock slaughter fall below the lows of a fortnight ago, as all processors are forced to cut kills.  There is no doubt that the new rules and reduced capacity will be a major issue for Victorian livestock processors for the next six weeks, impacting the ability to supply export markets more than domestic.

In terms of price impacts, they are more likely to be felt in lamb markets, with Victoria holding a much larger proportion of the national kill than in cattle.  Additionally, supplies are due to start ramping up towards the spring, starting in late August (figure 1).  If other states don’t increase capacity, a backlog of lambs could see a supply and price hangover as we move toward peak late spring and summer supplies. 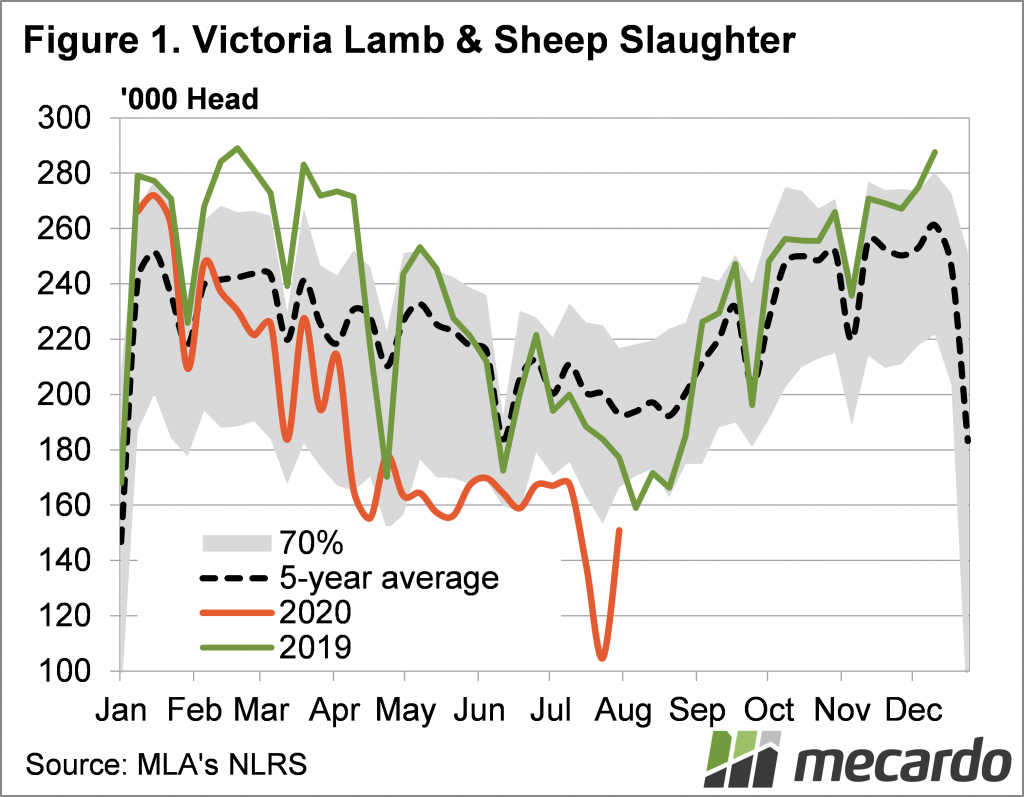