The energy crisis hitting Australia has caused a great deal of speculation about the impact of price rises upon the Aussie manufacturing sector, particularly meat processing. Today we break it down into a cost per steer and lamb.

Concerns have been raised about how this huge paradigm shift in input costs will impact Australia’s red meat processing sector, which is already suspected to be sustaining losses due to low throughput. The timing and severity of the impact for each individual meat processor will vary depending on the current structure and expiry date of their energy supply contracts. Worst impacted in the short term, will be processors whose energy costs are directly linked to the wholesale electricity and gas spot markets. On the other end of the spectrum, some operators may have long term fixed contracts in place at low prices which will not expire until a point, months or years into the future.

How much energy does it take to process red meat?

The answer is, A LOT. There are a number of energy-intensive processes involved with converting a steer or lamb into meat for our dinner plates. These include refrigeration, steam and hot water generation for sterilization and wash down (90%) of costs), as well as heat required for rendering.

According to the Australian Meat Processing council (AMPC), as of 2013/14, the energy intensity of the processing industry sits at around 3,005MJ/t HSCW. (figure 1) A lot of work has already gone into improving energy efficiency in the industry, as energy intensity has reduced 27% since 2009, where it sat at 4,116MJ/t HSCW. However, this is just an industry average- some plants can use up to 35% more energy, particularly if they undertake rendering activities. This compares well with studies from the UK which pitch energy use at similar levels (figure 2).

Australian spot gas prices are currently trading at 4.29¢/MJ at the Sydney node. A processor with no long-term contract, fully exposed to spot market gas rates would be paying $44.83 per steer and $2.88 per lamb in pure gas costs, excluding network charges under this model. If the plant was fully electric-powered, at $0.30/KWh, the cost to process a steer would be higher at $87/head, and lamb at $5.70. In 2016, the AMPC estimated that total processor energy costs were around $15/head.

In reality, a fully spot exposed processor would be among the hardest hit in the industry, so the prices above can be looked at as an extreme upper limit. The AMPC also suggests that the average processor’s fuel mix may be more like 60% electricity, 40% gas. Figure 3 charts energy costs for cattle on a sliding scale for various price scenarios for gas and electricity unit costs. Figure 4 depicts the same for sheep & lamb.

The increase in gas & electricity prices will could cost meat processors up to 200% per head more, or in excess of this under extreme scenario. This spike in costs has the potential to translate back to lower prices for producers. Stakeholders interested in reducing energy costs can access MLA’s myenergy.tech calculator. 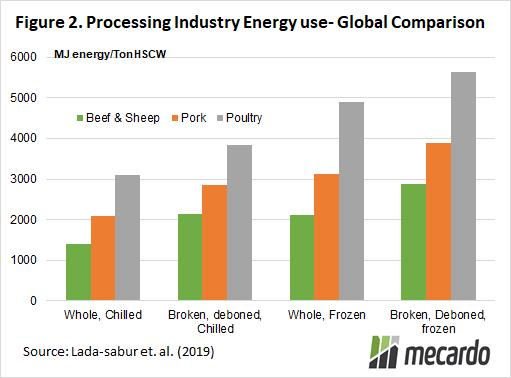