Export buoyant, but flock still on the decline in NZ

Mecardo’s look into international sheep meat supply and lamb price last week showed that the domestic flocks of some of Australia’s export markets are playing a role in the fortunes of the sheep trade, and it is not solely Anzac dictated as we may have once thought. The fact remains, however, that New Zealand is Australia’s main sheepmeat export competitor, and their supply trends do impact our trade.

Total New Zealand sheep and lamb slaughter for the first five months of 2022 was well back on the numbers from the same period in recent years. There were 11.5 million sheep processed from January to May this year, 8% less than the 11.4 million slaughtered in the same period of 2021. It was also below the 12.8 million in the same period of 2020, and 12.4 million in 2019. If we look at lambs specifically, the 9.69 million head slaughtered in the first five months of this year was about 8% lower year-on-year, and 14% below the average of the previous five years.  Beef + Lamb NZ estimates 18.3 million lambs will have been slaughtered in 2021-22, down 0.3% from the previous year, and 3.7 million sheep, a drop of 2.8%.

According to Beef + Lamb NZ’s mid-season update for 2021-22, China and the US drove export growth for New Zealand lamb for final quarter of last year.  China made up about 45 per cent of New Zealand’s total lamb exports (compared to 21% of Australia’s lamb exports for the same period) and the average value of lamb exports from New Zealand to China were 16% higher year-on-year, and 35% above the five-year average for that period of time. The US accounted for 12% of New Zealand’s lamb exports for the first quarter, up from 8% the year before, but well below the nearly 26% of Australian export lamb market share.  The actual volume of NZ lamb which headed to the US was up 19% year-on-year, however, and 38% higher than the five-year average.

Strong export demand and prices, along with record-high domestic returns, hasn’t been enough to turn around, or even stall, the sheep flock decline in NZ. A number of factors, including increasing input prices, domestic environmental policy and alternate commodity encroaches have been cited as contributing to this. The above shows us there is still plenty of scope for increases in production in Australia to fill international demand. 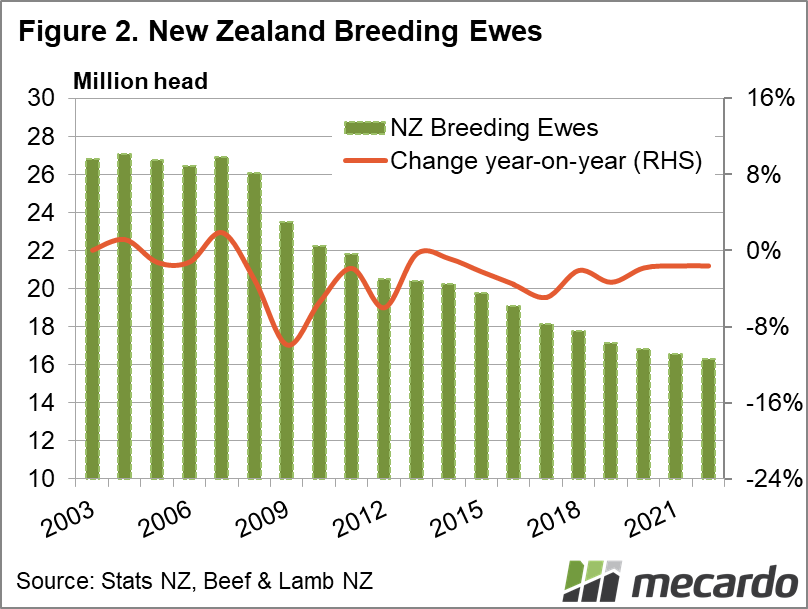