Regular readers will have been catching as bit of a bearish theme lamb price in our sheep articles of late. There appears to be more lambs on the ground, and rising crossbred sheep flocks, which is likely to mean the continuation of the ‘lower than last year’ price theme. This week the first forwards for new season lambs are out, and they are priced accordingly.

Hopefully when last weeks slaughter numbers come out, we’ll be able to get a better handle on the current supply/demand situation.  Three short kill weeks make that supply hard to gauge, and hopefully we’ll come out with higher slaughter rates as processors are able to ramp up.

All indicators are pointing towards the new season lamb crop being bigger this year.  In theory prices should be lower, in the absence of stronger demand.

The starting value of 880¢/kg cwt for the first week in August isn’t far off the Eastern States Trade Lamb Indicator (ESTLI) of 827¢ for the same week in 2021.  We need to consider, however, that most of the lambs in the ESTLI were old season lambs at that stage, and new season lambs were priced better.

The trend in the forwards from August onward isn’t far from the five year average, with prices easing through to the end of September.  Figure 1 shows that the ESTLI rallied last year in August, then held, basically due to tight supply.   In fact, prices didn’t fall to the levels of the late September contracts until March this year.

Figure 2 shows the forward contracts for new season Merino lambs, which are 20¢ behind the crossbreds.  As always, the Merino forwards look much better compared to the indicator, as the saleyard discount is usually much larger than 20¢.

Contract prices for old season lambs were also quoted, they were all 30¢ behind the new season values.

Those with the usually valuable first new season lambs are facing a conundrum.  Take a price worse than last year, or take your chances.  Additionally, is the 10¢ drop in price every week worth the extra weight gain at a time when feed should be growing.

Much depends on how processors come out of mid year breaks in terms of capacity.  Covid lockdowns and mass isolations are hopefully a thing of the past, but the labour difficulties remain.  With lamb still in strong demand in export markets, there is some incentive to ramp up production. 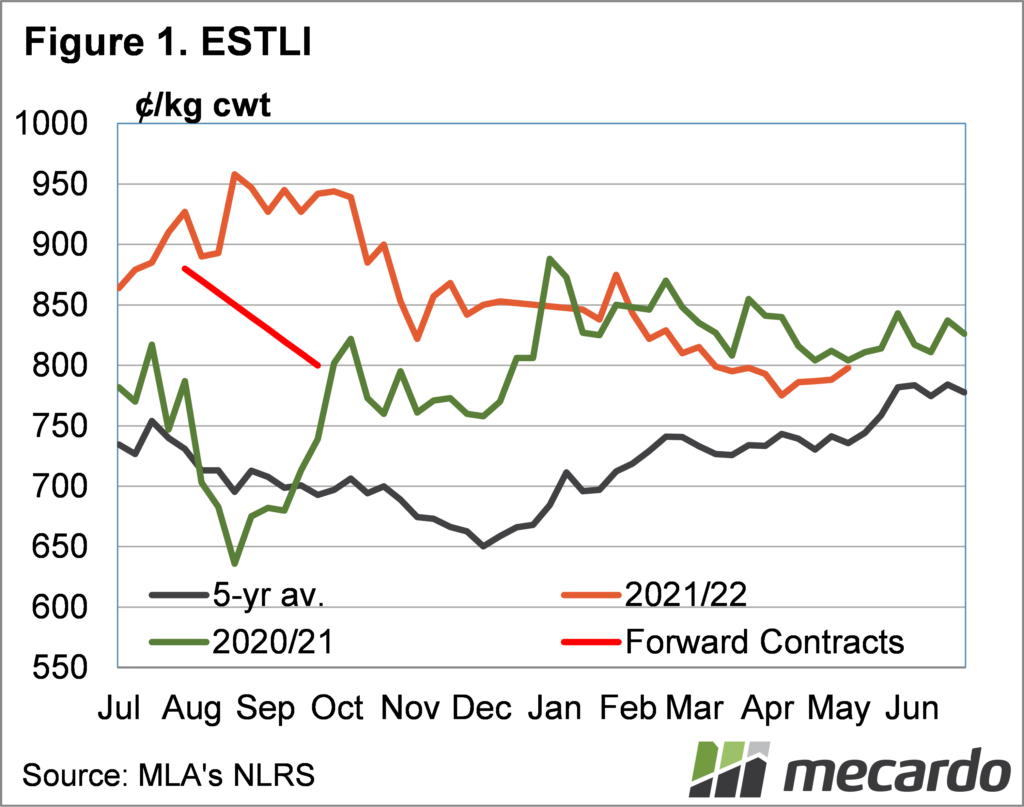 If we needed any indication that lambs had gotten too cheap, we have seen it over the last fortnight. Here we take a look at