Normally wool offerings begin to decline at this time of the year, however the recent increase in prices has encouraged growers who had held wool over to now come forward and offer. Despite the documented challenges of shipping, global lockdowns and extended exporter finance requirements, the improved market of recent times resulted in another week of solid sales clearance.

The EMI continued to improve lifting 7ȼ/kg to 1434ȼ/kg.  The Aussie dollar was marginally stronger, lifting slightly on last week to 0.699 US, resulting in a modest lift in the EMI in US terms to 1004 ȼ/kg.

The Western Market Indicator (WMI) also improved, lifting 13ȼ to finish the week at 1515ȼ. The last time the WMI was above 1,500 cents was in March 2020. All indicators in the west lifted between 12 to 59 cents, except for the 21 MPG which eased 5 cents.

Crossbred wools battled with the 28 & 32 MPG giving up 15 & 10 cents respectively, while the other crossbred indicators were quoted as firm. Cardings on the other hand were well bid with AWEX reporting an average of 19 cents lift across the selling centres.

This week on Mecardo Andrew Woods looked at Vegetable Matter (VM). VM levels remain high by historic standards across most micron categories, although they have eased slightly for 20–21-micron May levels. Consequently, VM discounts remain high, and are likely to do so until the after the mid-season break in auctions.

Next week there’s another big offering rostered, with 46,392 bales currently listed for sale with all centres are selling on Tuesday & Wednesday. 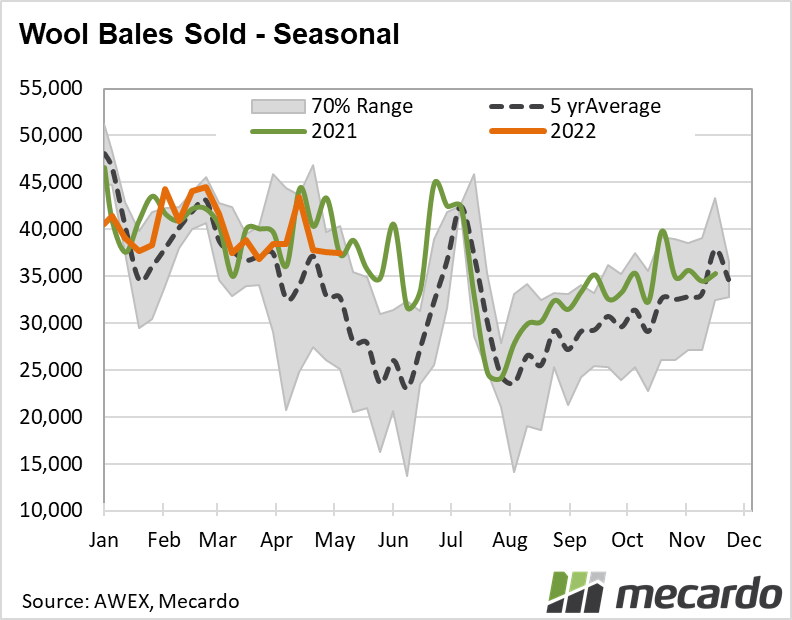