Lamb forwards behind last year but might still be value

The sliding lamb market as we head toward Easter has raised more than a little concern for lamb producers. About the only end of the market which hasn’t eased is the restocker category. This is likely due to some forward contracts which have been on offer for the winter. Here we look at how they compare to last year and current values.

The period between the last of the old season lambs coming to market, and the start of the new season lamb supply is generally the tightest time for lamb supplies for the year.  The supply dearth hits most years, and can start any time in June or July, and ends sometime from late August all the way through to October.

The five-year average shown in figure 1 has lamb prices kicking higher early in June, and easing from late July onwards.  Last year the peak came later and lasted longer.  In 2017 there wasn’t really a peak at all.

The forward prices for NSW and South Australian delivery for June, July and August point towards steady to slightly higher prices through the winter.  The red line on figure 1 shows where the prices for cross bred lambs were pitched in NSW.

For a 25kg cwt lamb, the difference is $35 per head, which is a significant decline if budgets were done on last year’s levels.

Taking some forward prices would protect downside of the like seen after the big La Nina year of 2011 when prices continued to slide during winter.  There is upside in the market of course, with the incentive to hold females and Merino wethers the key to pulling up supply in the winter. 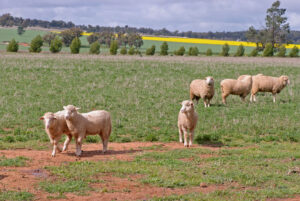