Since the Australian Bureau of Statistics switched to quarterly reporting on livestock production we can’t get as accurate a picture of what is happening with lamb carcase weights, and as such we haven’t looked at it for a while. The quarterly data is interesting nonetheless and offers some insights.

To calculate lamb carcase weights we simply take the amount of lamb meat produced in a quarter and divide it by the number slaughtered.  Carcase weights can help understand the type of lambs being turned off, and how seasonal and price impacts are impacting decisions at the farm gate.

It should come as no surprise to see lamb carcase weights have been on the rise since the mid-90s.  Improving genetics, nutrition and price have all played a part in rising lamb carcase weights, which hit a record of 25.5 kgs per head in the June quarter.

What was most interesting was to see September depart from the upward trend, with July to September carcase weight down from not only the June quarter, but down on 2020 as well. There were 15% more lambs slaughtered in the June quarter, than the same period in 2020, so it would seem lambs came to market earlier.

In the September quarter it was both NSW and Victoria, the major lamb slaughter states, which had lower carcase weights.  NSW was down by 5% on last year, and Victoria 4%.  In contrast, WA lamb slaughter weights were up 5% to 22.8 kgs/head.  September is usually the lowest weight quarter in the west, and this year it has beaten every quarter of 2020.

We were asking last week whether the stronger lamb slaughter in the September quarter this year was old or new lambs.  Based on the lower carcase weights it seems they were new season lambs, sold earlier due to the higher ȼ/kg pricing.  As it has played out, this has limited supply of lambs in October and November, with slaughter only recently reaching last year’s levels. 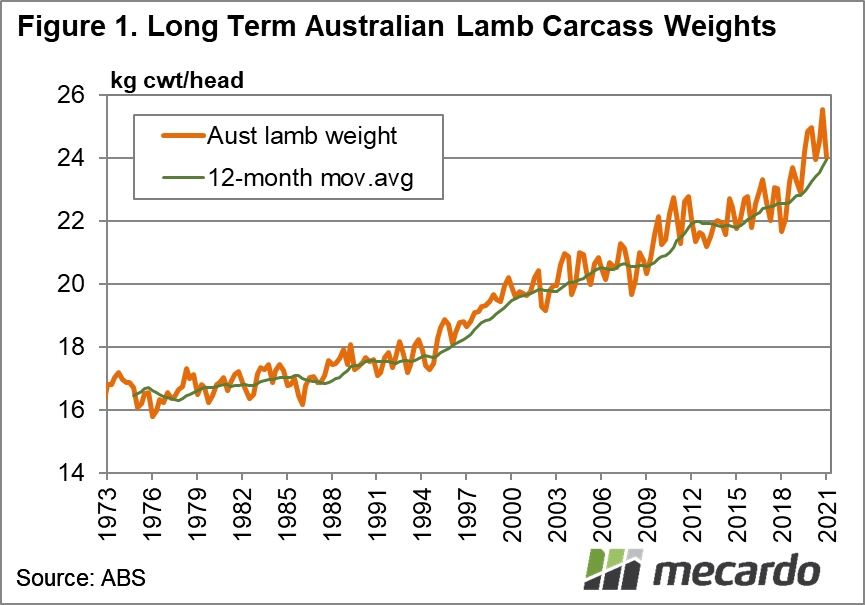