A lower yarding with lamb numbers back in most major yards this week helped to provide a much-wanted price boost. All categories lifted in NSW, however, in Victoria the downward trend continued for all but Merino lambs.

Tightening saleyard supply has finally put a stop to the price decline that we’ve seen over the last three weeks. Last week lamb yardings were back 12% and sheep 14%, and MLA saleyard reports suggest that this week, throughput was lower again at major yards.

The Eastern States Trade Lamb Indicator lifted 55¢ on the week to settle at 689¢. The ESTLI is currently 26% lower than at this point in 2021.  It was much stronger competition for the limited yardings in NSW that really drove the market up. In NSW Merino lambs were up 71¢, Restockers 122¢ and Heavy lambs 52¢ on the week prior.

For Victoria the only type that saw prices improve were Merino lambs, which gained 47¢ to 656¢/kg cwt, currently sitting at 92¢ premium to Merino lambs in NSW.

In the west, the market was more mixed with store lambs improving but trade lambs tracking down another 5¢ to 481¢/kg cwt. Most indicators in WA are around 250¢ lower than at the same time last year. Mutton continued to follow the mood of the lamb market. The National Mutton Indicator picked up 32¢ to 495¢/kg cwt.

We saw earlier this week that there are signs of weakening demand in export markets which adds to the story of why prices have slumped so quickly during winter. Whether we’ve seen the bottom (like in 2020/21) is too early to say. With the number of factors playing against the market, including the bottleneck in getting meat from the processors to the end customer, there are a few challenges to iron out before we see a big rebound. 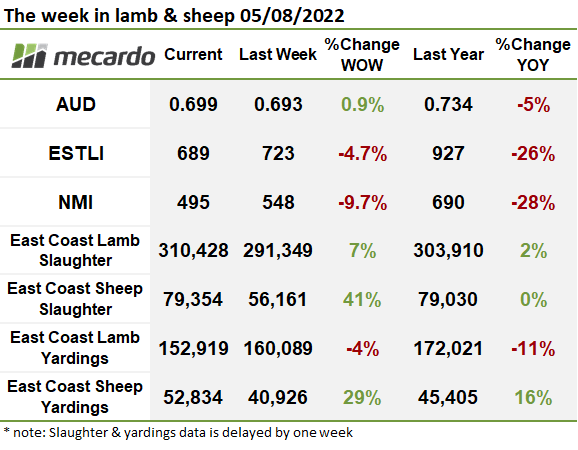 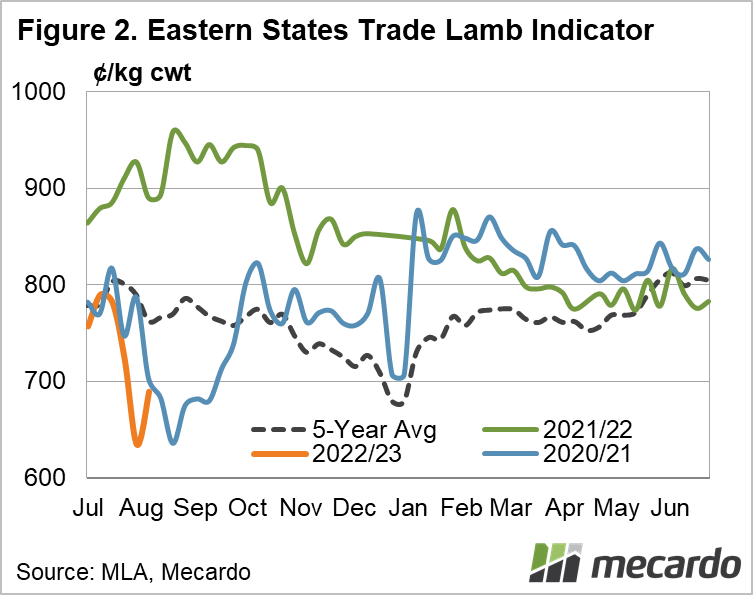