Australian lamb exports dropped last month, but mutton picked up the slack, with volumes hitting their highest monthly total since October 2020. October is historically one of the two largest months of the year for lamb exports, but domestic slaughter volumes continue to track well below the same period last year. And despite an increase in new season lamb throughput in October, the number of older export weight lambs dropped off. Total sheepmeat exports have been tracking below both year-ago levels and the five-year-average for the past two months.

Despite predictions lamb exports would finish the year 6% higher than the previous 12 months, October volumes have brought that to currently sit at just 3%. October lamb exports haven’t been this low since 2012, and it was the second-lowest monthly total for the year after January. According to the five-year-average, lamb exports historically climb 20% from September to October, however this year they dropped 10%. Monthly export volumes have been tracking above the five-year-average 70% range since June, but last month fell below it for only the third month since the beginning of 2020.

Where has the recent lamb slowdown come from? Exports to the US, which currently hold the biggest market share of Australian lamb, were 8% below year-ago levels for the month of October. They fell below the five-year-average for the month for the first time since February, dropping 11% month-on-month. And the US has been leading the charge when it comes to total lamb exports increasing year-on-year, up 16% for January to October.

The loss of steam seems to have only come in the second half of October, with the Steiner Consulting Group out of the US reporting imports of Australian lamb being up 73% year-on-year in the four weeks to October 16. Imports to the US from New Zealand for the same time period were 93% higher. Prices have also risen significantly with Steiner showing US prices for Australian lamb short loin, racks and legs up between 40 & 62% compared to the same time last year.  Overall, chilled Australian lamb prices in the US are up 43% year-on-year, and frozen is up 51% (frozen values include New Zealand).

Meanwhile mutton export volumes surged higher in October, with year-to-date totals now just 11% lower year-on-year, compared to where it was tracking after September at 17%. They climbed a whopping 44% compared to the previous month, and are now back within the five-year-average 70% range, having spent the previous three months well below it. October mutton volumes to the US were up 64%, both year-on-year, and on the five-year-average.

Australia’s slowing of supply, teamed with historically strong domestic prices and the ongoing shipping shortage, especially for fresh product, have contributed to the brakes being put on the rise of lamb exports this year – which in turn has encouraged more mutton to be imported from here instead. None of these factors indicate any drop in demand however, meaning the slowdown should be short lived as these factors are ironed out in coming months. 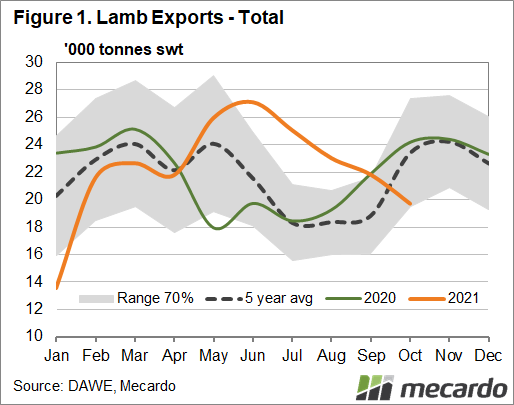