The lamb market had us fooled into believing we’d passed the winter price peak and were well and truly on the downward run towards spring. How wrong we were. This week prices rallied hard in NSW and Victoria, pushing the Eastern States Trade Lamb Indicator (ESTLI) just shy of a record.

The ESTLI ended the week at 957ȼ/kg cwt after having lifted 66ȼ over the week. This was just 9ȼ shy of the all-time record set in March 2020. Trade lambs are currently 316ȼ or 45% higher than the same time last year.

Western Australia, unfortunately, missed out on the rally. The Western Australian Trade Lamb Indicator lost 6ȼ on the week to 723ȼ/kg cwt. Results were mixed in South Australia, but NSW and Victoria were the clear driving force. Trade and Heavy lambs in Victoria picked up over 100ȼ each, and in NSW improved by around 60ȼ. Restocker lambs were the hot ticket item in NSW, with the indicator lifting 123ȼ over the week to 1,066ȼ/kg cwt. MLA reported that new season lambs at Wagga broke the national record with a pen of 31kg cwt lambs reaching $331.20/head.

The National Heavy Lamb Indicator, at 983ȼ/kg cwt, is 383ȼ or 60% higher than the same time last year. Mutton also took part in the action. The National Mutton Indicator lifted 28ȼ to 675ȼ/kg cwt over the week.

All this price strength came in a week where one of the key processors was offline. Fletchers International temporarily shut the doors to its Dubbo plant in response to the Covid outbreak in the community, and announced it would not be bidding in saleyards.

The latest slaughter and yardings figures are for the week ending the 13th of August, so we will have to wait until next week to get a better idea of how supply impacted the rally. There was a slight lift in lamb slaughter last week, increasing just 0.5% from the week prior. Sheep slaughter also lifted 6%. 426,858 head of lamb and sheep were processed in the week which is 3% more than the five-year seasonal average.

Yardings did show a large dip in lamb throughput however. East coast yardings dropped 25% last week with all states contributing to the lower throughput. Despite the fall yardings of 155,996 head was still 31% higher than the same time last year and 9% higher than the five-year seasonal average.

The good news is that the stronger supply this year isn’t sending prices lower. As we’ve seen this week they are showing real resistance, even with strong supply. A tipping point will come again, even if it’s later than normal. Those in NSW with new season lambs will be seriously considering getting them on a truck and more lambs now is better for prices come spring. 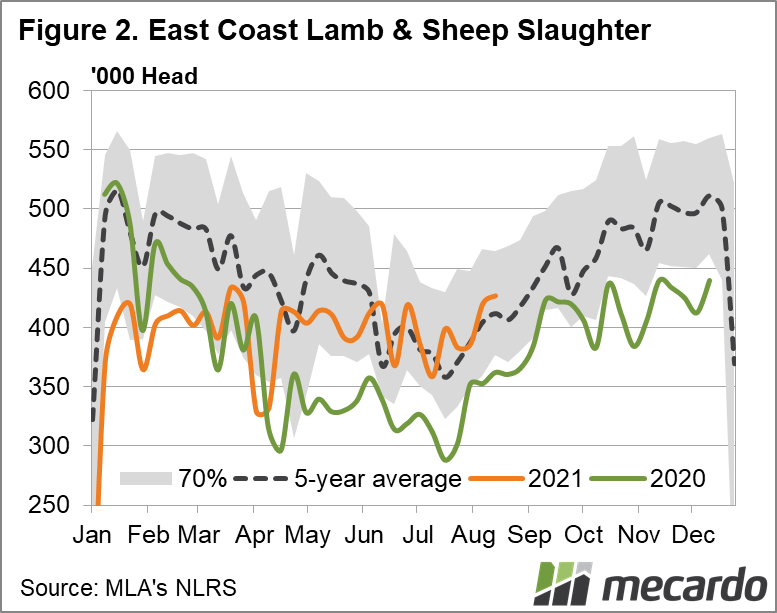