We were all aware of the processing capacity constraints afflicting the lamb and mutton sector in January, and the lack of lamb on supermarket shelves. However, it looks like export markets didn’t miss out, with international demand ensuring product still went overseas.

Meat and Livestock Australia’s (MLA) weekly slaughter data showed east coast lamb slaughter down 16.4% on last year in January.  The Omnicron wave and resultant labour issues were the driver in the weaker slaughter, rather than slow supply.

However, lamb exports managed to jump 25% higher than January last year, with figure 1 showing just over 17 thousand tonnes shipping out.  While lamb exports were down on December and the five year average, it was quite remarkable to see a gain on last year.

Who is driving the increased exports?  As usual, at least for the last couple of years, the answer is the US and China.  January lamb exports to the US were up 34% on 2021, and slightly stronger than the five year average.  China exports were higher than last January, up by 30%, but figure 2 shows that it was still the lowest export month since last January.

It seems China did suffer somewhat from weaker slaughter, but as we saw when looking at export values a couple of weeks ago, the US has more money.

Mutton exports paint an interesting picture, perhaps we saw an increase in slaughter weights.  Despite sheep slaughter being down 25% for January on the east coast, and close to that in the West, mutton exports managed to post an 18% gain on 2021.

There might have been some carryover of animals slaughtered in December, and exported in January, but it’s still quite extraordinay to see a lift in exports, despite a fall in slaughter.  We need to remember that almost all the mutton produced in Australia is exported, so there was no domestic market to take it from to prop up exports.

The optimist might look at the China lamb export figures and think that there is pent up demand there to soak up the increase in supplies we are going to see as the backlog from January is cleared.  The pessimist might see it as weaker demand out of China which is going to impact markets to the negative.

Overall the January export data shows that demand for our lamb an mutton remains robust, and it’s will likely take any increased supply we see over the coming months.  Slaughter capacity is likely to be the restraint in the market, not demand for meat. 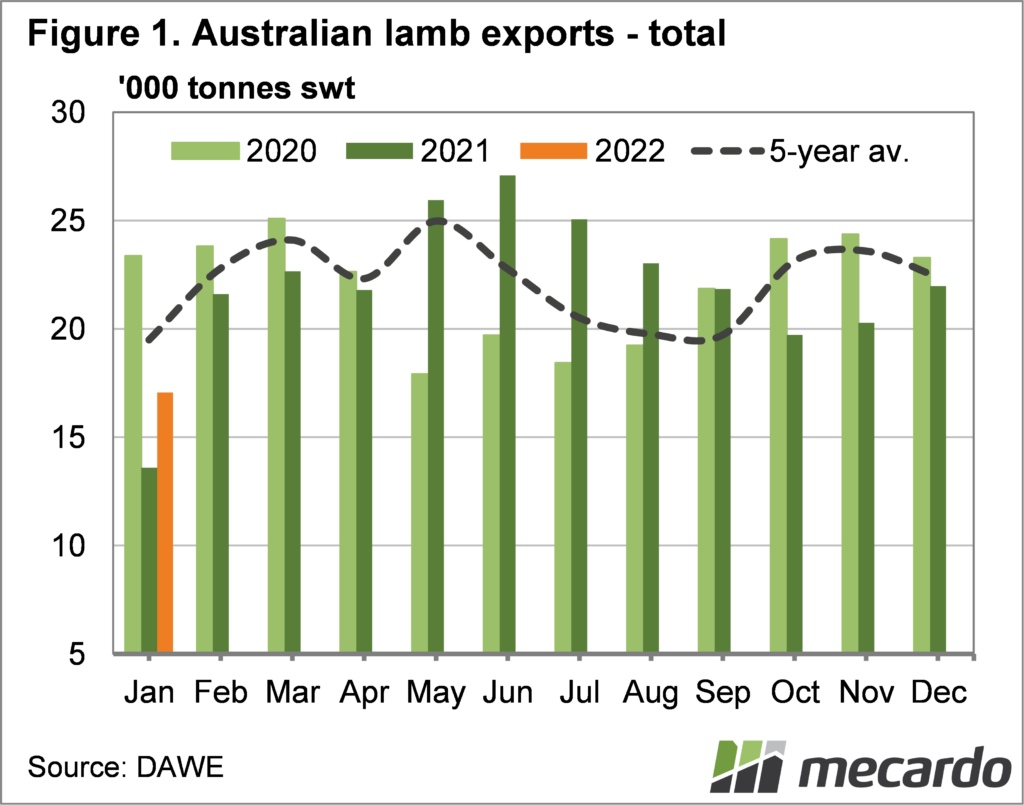