Store lambs off the boil for now

It was only a few months ago that Restocker lambs were fetching 1000ȼ/kg, but demand for store lambs has waned and prices have moved back in line with the finished market. Demand from processors remains strong with Trade and Heavy lamb prices holding their ground.

While slaughter for the last week of May remains a mystery, with technical issues disrupting this metric of market reporting, we do have the numbers for the first week of Winter. A total of 342,302 head of lambs were processed in the east which was up 8% on two weeks prior. This was just 1% under the five-year seasonal average.

After last week’s jump in lamb yardings, east coast throughput fell back 19% to see 175,074 lambs yarded.  Victorian lamb throughput dropped to the lowest level in two months but this was still 3% higher than the five-year seasonal average. In NSW, lamb throughput dropped 20% on the week prior, but the tally remained in line with average levels for this point in the season.

Sheep throughput declined in all states last week. In the east the week on week decline amounted to 3%, while in the west approximately 2,000 fewer sheep were yarded compared to the week prior, down 27%.

The Eastern States Trade Lamb Indicator dropped 7ȼ for the week, to end at 810ȼ/kg cwt. Restocker lambs continued to trend weaker, with the National Restocker lamb Indicator down another 19ȼ to 799ȼ/kg cwt. The last time the Restocker indicator was below 800ȼ was in October last year. In Victoria Restocker lambs are trading at a 10ȼ discount to Trade lambs while in NSW, restockers are still attracting a small 20ȼ premium over trade lambs. Heavy and Merino lamb prices improved, with the national indicators gaining 13 & 14ȼ respectively, while the Naitonal Light Lamb Indicator lifted just 2ȼ.

As mentioned in this weeks analysis of the lamb and sheep supply projections (view here), sheep slaughter is expected to be lower this year than last, which will be supportive of prices. The National Mutton Indicator has spent much of last few months in line or higher than year ago levels, but this week a 22ȼ decline to 640ȼ/kg cwt saw the indicator 19ȼ below the same time last year.

With the rain received in the south east over the last week, the prospect of a rebound in price is strong. It’s still very early days of Winter (although it might not feel like it) and we’re still a way off the seasonal low in supply, but there isn’t likely to be much downside to price as supply tightens up. 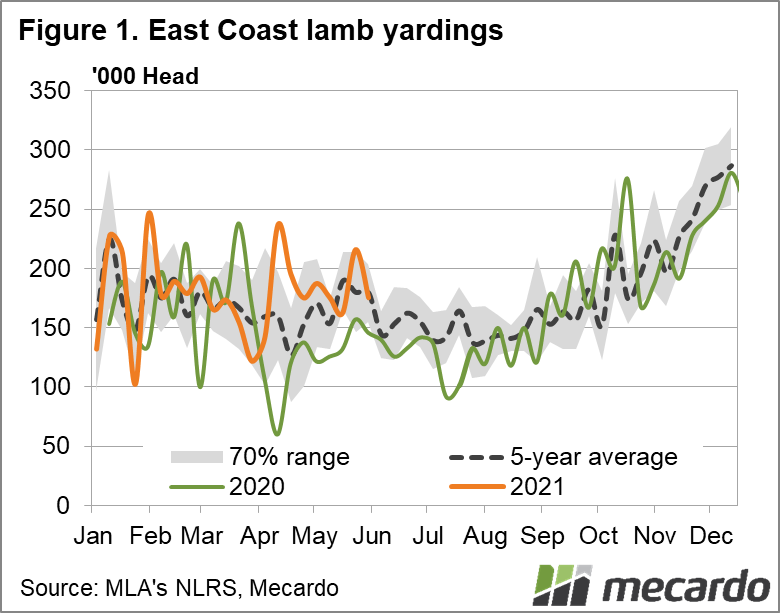