Lamb slaughter has been consistently stronger than the same period last year in recent weeks. While the export demand is there, it hasn’t been enough to completely relieve the pressure on lamb prices with all finished lamb and sheep indicators sitting lower year on year.

East coast lamb slaughter totalled 337,908 head last week which was 7% higher than the same week in 2021 and just 2% under the five year seasonal average. Kill space was prioritised for lambs over sheep with mutton slaughter dropping to 55,680 head in the east, a 37% decline on the week prior and 26% below the same week last year.

Lamb throughput in eastern saleyards slid 1.4% compared to the week prior, with all states bar Victoria showing a decline in yardings. In WA lamb yardings almost halved, with just 6,405 head passing through.

The Eastern States Trade Lamb Indicator dropped 29¢ over the week to 777¢/kg cwt. The indicator has been moving within a 32¢ band since mid March and is currently on the low side of that range. In the West, thin lamb numbers at saleyards have caused a lot of volatility in the price indicators. Trade lambs in WA jumped 160¢ back to 707¢ this week.

The National Heavy Lamb Indicator fell 10¢ to 775¢/lg cwt over the week . The gap between trade and heavy weight lambs narrowing further. Restocker lambs remained reasonably steady while Merino lambs picked up another 21¢ over the week. If we compare the National indicators to the same time last year, it’s light lambs that are the only category sitting higher, even if just by 11¢.

The National Mutton Indicator lost just 2¢ over the week to 617¢/kg cwt.

Lamb prices typically track sideways through June as supply starts to tighten but based on MLA’s forecast, supply is expected to be stronger this year than last. We know exports make up a large proportion of lambs sales, and with the low AUD there is room for them to pay more. This should be enough to limit downside at least if supply pressure unfolds. 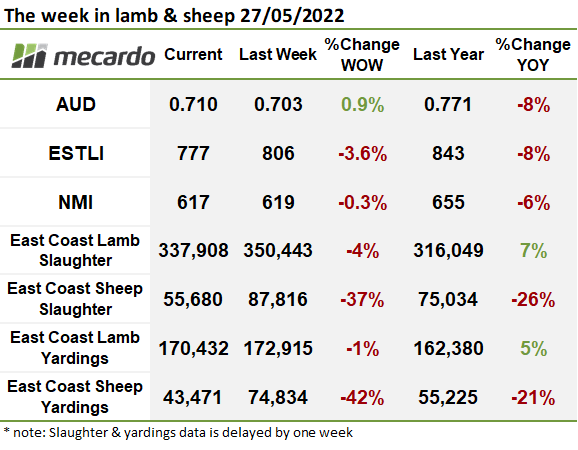 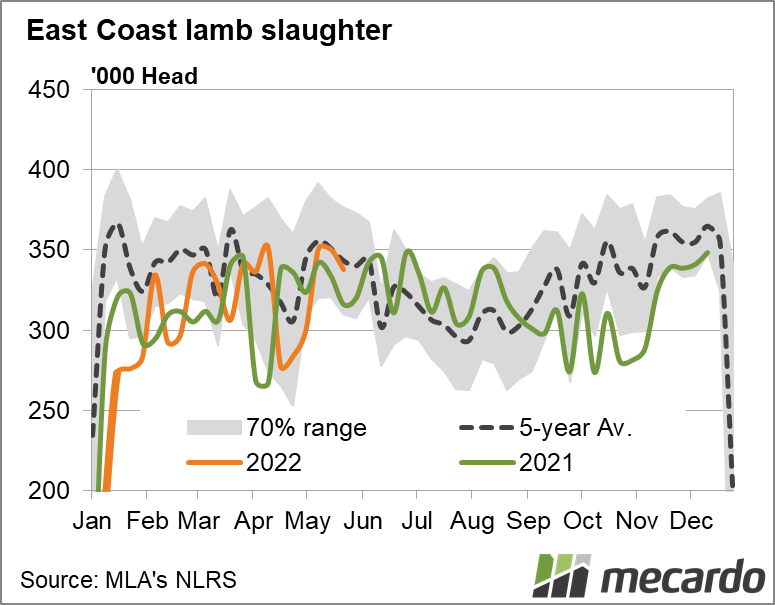