The flocks within the flock

A few weeks back we had a query on the seemingly strange anomaly in the long term sheep and lamb charts, where a falling flock seems to have coincided with rising lamb slaughter. The hypothesis offered was that the wool/meat sheep flock proportions are shifting, and to an extent they are, but this looks like it might have halted in this latest rebuild.

Every time we look at long term sheep flocks and slaughter rates we see that over the last 20 years the flock has decreased, while lamb slaughter has increased.  Well, this was the case up until 2009, when the flock liquidation slowed.   Figure 1 shows lamb slaughter continued to increase up until the 2016 peak, and has since fallen due to the falling flock.

Intuitively this tells us that there was a shift towards meat sheep, producing more lambs from a smaller flock, up until 2016, when more of an equilibrium was reached.  Figure 2 shows that lamb slaughter as a proportion of the sheep flock also peaked in 2016, at 34%, and it has since fallen to 31% in 2020, and is expected to spend the next three years just under 30%.

Sheep slaughter as a proportion of the flock is generally high during flock liquidation, and falls during rebuilding periods.  We might expect a large shift towards meat sheep with higher fertility would see the proportion of sheep slaughtered relative to the flock rise over time, as more replacements are bred.

Instead, it seems to have played out in higher lamb slaughter, as excess females are sold as lambs, rather than kept as replacement ewes.

The data on the makeup of the ewe flock is variable, but we can identify some trends.  Figure 3 shows the number of breeding ewes on hand according to the AWI/MLA Wool and Sheepmeat survey over the last 10 years.

The most interesting part of figure 3 is the last three surveys, which show strong growth on ‘other’ ewes on hand.  The Covid induced crash in wool prices has seen the flock rebuild focus on ‘other’ sheep, while Merino numbers have fallen marginally.

The answer to the query we received is that the flock structure hadn’t changed much in the last 10 years, but this latest rebuild appears to be meat focused.  This will lead to more lambs being produced in the coming years, while merino wool production should remain relatively steady. 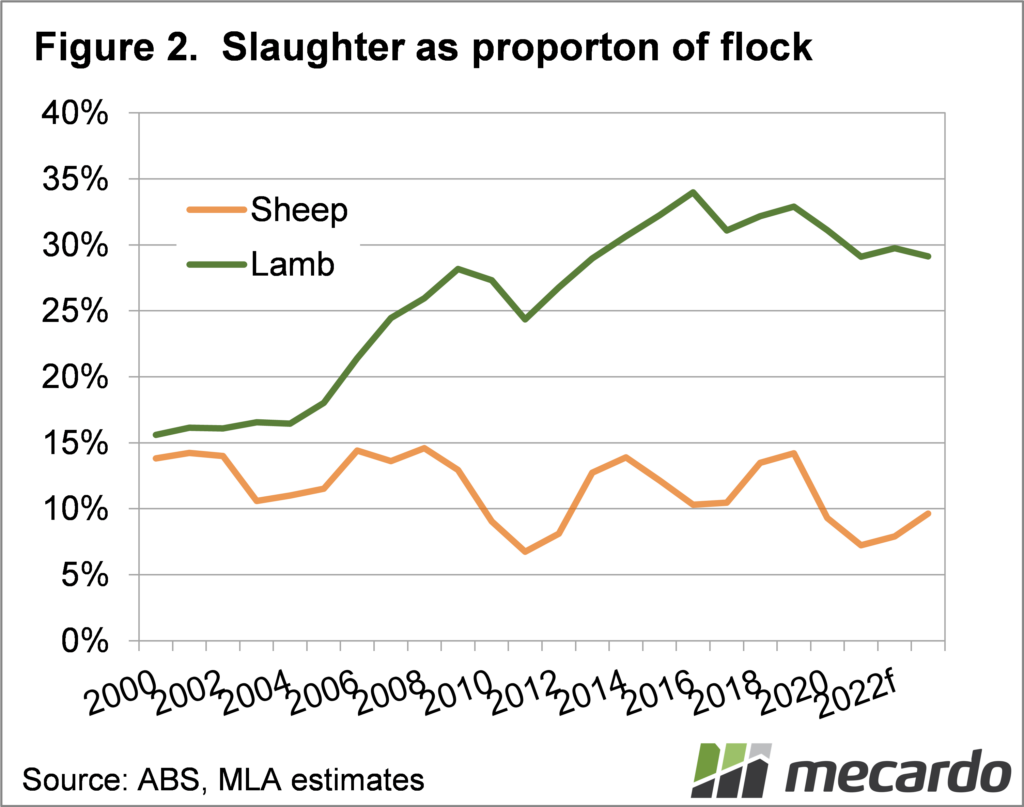