Victorian supply dragging in December and worse in January

January lamb and sheep slaughter has failed to rally in its usual fashion. Normally January sees a spike in both sheep and lamb slaughter as processors catch up from the break, and stock up for Australia Day. This year it’s Victoria which is dragging slaughter lower.

Given the state of the sheep flock, and supplies of sheep in the second half of 2020, it was no surprise to see sheep slaughter well behind last year in the early weeks of January.  What was a little surprising was low lamb slaughter.

Historically lamb slaughter spikes in January, but last week national lamb slaughter only managed to get to 320,938 head, which is below the historical range (Figure 1).  This year’s week 3 slaughter was 12% lower than 2020, and the lowest level since 2012.  Back in 2016 the same week saw nearly 425,000 head slaughtered, so either total supply is lower, or growers have gotten better at spreading their supply.  Most likely it’s both.

NSW and South Australian lamb slaughter levels were higher than the same week last year, which made up for some of the decline in Victoria.

East coast sheep slaughter was just under 90,000 head in week 3, which was similar to the end of last year.  Compared to January 2020 however sheep slaughter was way down, 43% lower.  Victoria and NSW both slaughtered around 37% fewer sheep in week 3.  In South Australia things are really tight, with just 1,044 head slaughtered, down 91% on the same week in 2020.

When slaughter is lower, either the lambs are still to come or simply not there.  Those with lambs still to sell would always prefer to see higher slaughter now, but with prices north of 800¢ things might still be ok.

With fewer lambs being marked than last year, and the push on to restock in NSW, lamb supply was always going to be lower, but the question is whether it can continue to support price over the coming month. 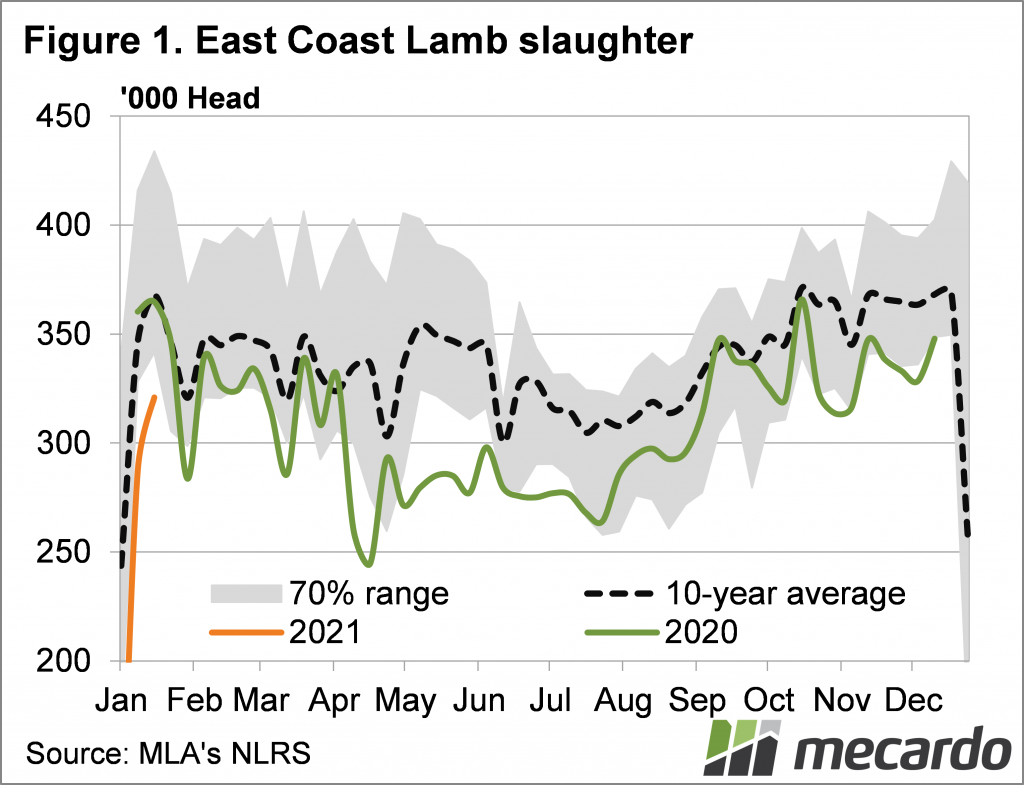