International travel has now been off the cards for Aussies for 12 months, and it looks like live sheep export has also had the breaks put on during the past year. It’s been a while since we had a good look at how live sheep export is tracking, and the first thing to note is the calendar year total for 2020 - the lowest figure recorded in more than 30 years.

2021 kicked off strong, with the January numbers higher than the previous year, but still at historical lows. February live sheep export looks non-existent, with just shy of 5,000 sheep headed offshore. This is 60,000 less than February 2020, and 165,000 less than the same month in 2019.

Live sheep exports have been dropping year-on-year for a majority of the past decade, with only two out of the 10 years higher than the year before. While the stop on sending live sheep to the Middle East during the Northern Hemisphere summer has put downward pressure on live sheep export volumes, it is not the only influence, having only been in place since 2018. And it doesn’t totally explain last year’s significant drop.

Total live sheep exports for 2020 were 28 per cent lower than the previous year, falling below the 1 million head mark for the first time since data records became available in 1989. However, due to a ship being held up due to a Covid-19 outbreak, then given an exception to sail in June, live sheep export figures from June to September were actually higher in 2020 than in 2019.

So, what has impacted the trade? Domestic demand and availability for starters. More than 1.8 million sheep (including lambs) were transferred from Western Australia to the eastern states in 2020, as many of the sheep producing areas in the east enjoyed a bumper season and the west did not – remembering live sheep trade is primarily WA based, with only an estimated 13,000 sheep exported by boat from outside of WA last year.  And of course, mutton prices have been at record highs as well.

While it has been pointed out that trade restrictions haven’t been the only influence, when you team them with the short supply and high prices created by flock rebuild and domestic sheep movement, live export trade isn’t likely to bounce back in a significant way for the remainder of 2021. And as predicted last year, key markets in the Middle East have started to look elsewhere for supply when Australia can’t deliver, opening the door to other countries including South Africa. 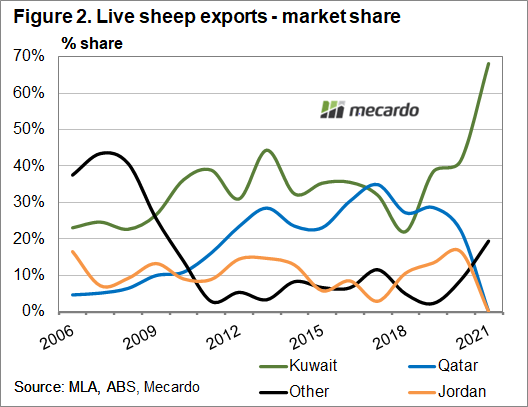