Better to slow down than shut down

The red meat sector was weaving through COVID-19 challenges relatively unscathed. At the end of the day, people have to eat. But just the announcement of new processing restrictions in our largest lamb producing state was enough to send the lamb market into freefall this week.

While there was some earlier confusion over the specifics of the restriction, it has now been confirmed that red meat processors will be limited to production capacity of two-thirds of the levels of operation last month, or staff numbers over a three-month period. We looked at the likely implications of the restrictions earlier in the week HERE.

All states and categories experienced market weakness. Although It wasn’t Victoria that saw the worst of it, it was New South Wales, where volumes of lambs are hitting a cheaper market. The Restocker lamb Indicator in NSW dropped a notable 137¢ or 15%. The week on week fall was more severe in NSW than Victoria, however, trade lamb prices in Victoria have now got a 6 in front. The spread between the two state Trade Lamb Indicators is 29¢ or a 4% discount for Victoria. The Eastern States Trade Lamb Indicator fell 85¢ or 11% to 703¢/kg cwt. This is just 12¢ above the five-year average for this time of the season.

For the week ending the 31st of July, combined lamb and sheep yardings on the east coast were 16% below levels of the week prior, and down 29% on the five-year seasonal average. All eastern states contributed to the lower throughput, but no surprise, numbers in Victoria were as low as we’ve seen (Figure 2).

Slaughter did pick up last week, reflecting some of the temporary processor closures getting back up and running. 285,733 lambs were processed on the east coast, a lift of 8% on the week prior. New season lambs in NSW are propping up numbers, and Victoria saw an addition 25,000 lambs processed compared to the week prior. Sheep slaughter also saw a considerable lift last week, 76% higher than the week earlier.

There’s no question of whether Victoria’s processing restrictions will weaken lamb and sheep markets in the short-term. Supply chains will be under the pump to manage the logistical challenges and ensure demand requirements can be met, especially before the spring flush. We’re likely to see more lambs building up on farms and in feedlots as a result. While the restrictions aren’t good news for prices, we saw what can happen when widespread shutdowns of meat processors occured in the US and if these restrictions help prevent that outcome (and further COVID-19 cases), we’ll be grateful they were in place. 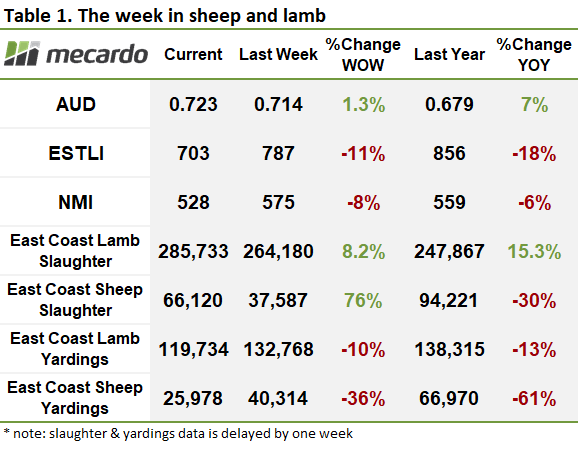