Can we point fingers at Victoria?

Processing disruptions appear to have spooked what was already a weaker lamb market. The closure of multiple meat works in Victoria have appeared in the slaughter figures and look to have flowed through to prices as well, but not in the way we want, with significant falls again across all types of lamb.

Lamb slaughter was back in Victoria for the week ending the 17th of July, with 130,807 head processed. This was 9% lower than the week prior and the lowest weekly slaughter so far this year. However, it was sheep slaughter that really saw the impact of reduced processor activity in Victoria. Just 7,806 sheep were processed in Victoria, which was 66% fewer than the week prior. This brought total east coast sheep slaughter down to just 19,845 head which is 73% under the five-year seasonal average (Figure 1).

Sheep yardings were well and truly at a low last week, dropping 26% from the already low levels of the week prior. Despite lower throughput of lambs in Victoria, a lift in lambs yarded in NSW saw east coast lamb yardings up 10% on the week prior. Some new season lambs arrived at yards but were sold into weak demand.

The Eastern States Trade Lamb Indicator (ESTLI) dropped 66¢ to 751¢/kg cwt this week (Figure 2). All types were lower in eastern markets, but Heavy Lambs in Victoria made a noteworthy fall of 131¢ or 16% to sit at 685¢/kg. We haven’t seen Heavy lambs prices with a 6 in front of them in Victoria since April 2019. We can’t put the blame for falling prices solely on meat work closures and reduced buyers though, with all states feeling the weaker market and restocker lambs significantly cheaper. The eastern Restocker Lamb indicator lost all the gains made last week and then some, falling 128¢ to 787¢/kg cwt.

With so few sheep around for buying, mutton prices have held relatively firm amidst falling lamb values. The National Mutton Indicator lost just 15c on last week to 591¢/kg cwt.

While last weeks supply figures reflect disruptions in Vic, with slaughter so low there is still plenty of capacity at other processors to pick up the slack where needed in the weeks ahead. As mentioned in this week’s analysis article, the real issues for price will come if COVID-19 infections continue to impact processing in spring. In that case, we might see a bottleneck and market reaction similar to that experienced in the US in April/May. 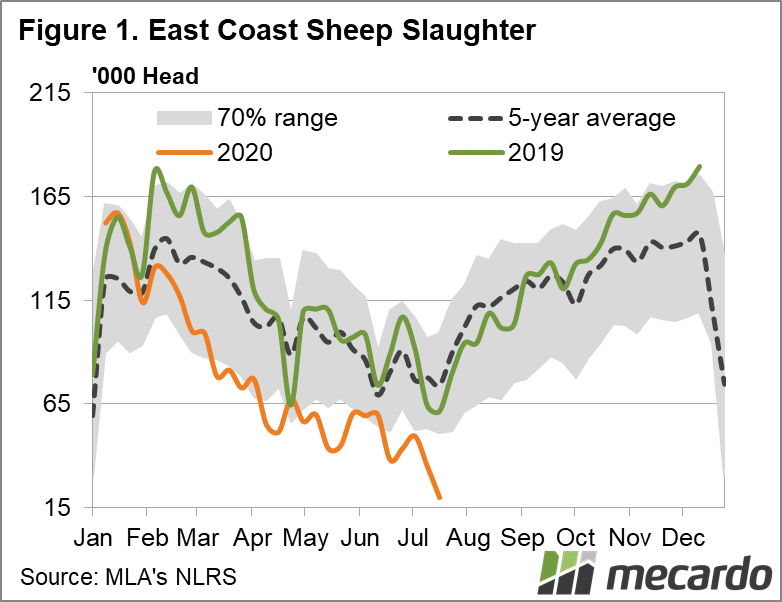