The market for young cattle continues to show sustained strength as the Eastern Young Cattle Indicator holds its ground above the 1,000ȼ mark just below all-time record levels. Processor steer prices fell heavily however, possibly related to reduced domestic demand stemming from COVID lockdowns. The outlook for export beef, particularly to the US, remains bright, especially given the backdrop of Aussie dollar falling heavily this week.

Yardings retreated 6% on the week prior, with the majority of the pullback in offerings emanating out of NSW, which saw a 22% plunge in numbers, with SA following the trend also.

East coast slaughter saw a minor net drop of 1% last week, with QLD numbers falling back 45% from the week prior, offset by a 5% pickup coming out of NSW.

On the national indicator categories, the result for the week was a mixed bag, with processor and heavy steers taking a hit, while vealers and restockers strengthened.

The fall in processor steer prices could be related to temporarily reduced domestic beef demand stemming from foodservice closures in VIC and NSW lockdowns.

The Aussie dollar took a huge tumble of 3% for the week, plummeting to 0.715US. Australia’s exposure to falling commodity prices, particularly iron ore, which plummeted 15% yesterday, down 44% from record highs set in May this year, was a prominent driver of the devaluation.

The latest release of ABS unemployment data showing a very positive 4.6% unemployment rate was largely ignored as irrelevant by the markets due to the VIC and NSW COVID lockdowns and was harshly described as “historical statistical dust” by treasurer Josh Frydenburg. The Roy Morgan estimate of Australia’s actual unemployment rate for July is a dismal 9.7%.

US 90CL frozen cow prices climbed another 8¢(1%) to 808¢/kg swt. The domestic US box beef cut-out is now up 23% in the last 4 weeks on the back of ongoing labour shortages. The price surge was compounded by buying activity from retailers expecting a surge in home cooking demand as the labour day holiday approaches at the start of September, and the risk of  foodservice closures and mask wearing mandates rise in the US.

Steiner reports that Americans have more cash in the bank than ever however, with savings deposits up 300% compared to two years ago, with general household wealth bolstered by a 15% increase in house prices. This increased wealth is thought to have had a smoothing effect on the propensity for US consumers to spend on food items like beef, even when faced with higher prices.

There is a lot more rain on the horizon for the week ahead, with eastern VIC and southeast NSW set to receive 25-50mm, with the balance of those states slated for 5-15mm, and QLD to receive a modest 5mm. With market prices largely remaining resilient this week, and the lower AUD likely to stimulate export orders, more of at least the same holding pattern is definitely on the cards for next week. 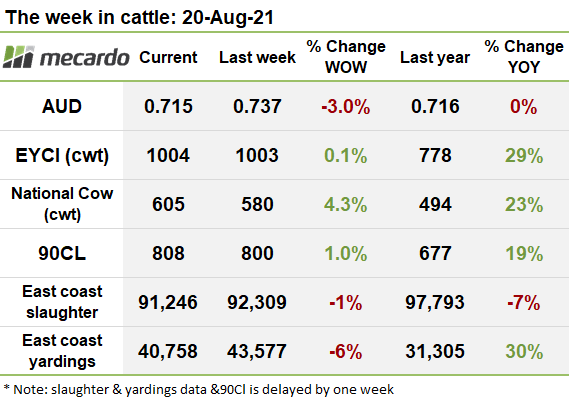 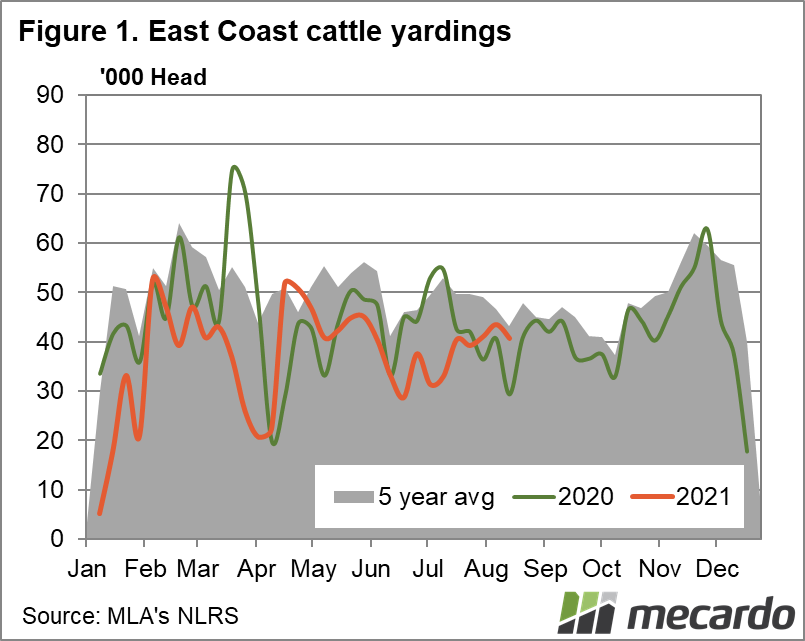 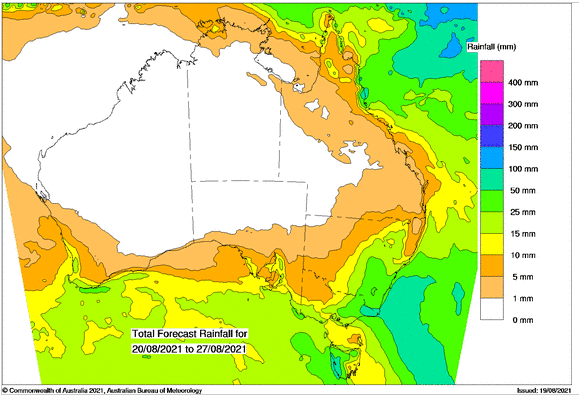