Chilled or frozen, the sheepmeat demand is there.

Processors buying at the yards added some pep to the market this week. Finished stock were 40-46¢/kg cwt dearer by the end of the week as processors increased their kill rates to meet strong export demand.

Last week, east coast lamb slaughter held strong at 341,353 head processed and 86,529 head of sheep. Combined this saw slaughter 9% higher than the same time last year, and slightly above the five year seasonal average level. An increase in slaughter in SA and NSW drove the lift week on week.

We’ve been saying for a while now there’s more upside to lamb as the fundamentals are there for price support. As reported in this weeks analysis (view here) tighter sheep supply is another one of those factors, as more space is made for lambs on the kill floor.

East coast lamb throughput of 185,841 head for the week ending the 27th of May was a 8% jump on the week prior but is still trailing usual throughput expectations for this time of year. Over the last five years, on average at this point in the season we have seen weekly throughput 5% higher than last weeks levels. For sheep, numbers only really started tightening up a few weeks ago, and we are seeing similar numbers come through now as we saw at this time last year.

The Eastern States Trade Lamb Indicator picked up 40¢ on last week, driven by particularly strong demand out of NSW. Heavy Lambs we also well sought after in NSW and Victoria, with the National Heavy Lamb Indicator coming in 44¢ higher than the week prior at 820¢/kg cwt. This has pushed the heavy lamb price 34¢ higher than the same time last year, another indicator of export demand strength. Light lambs were steady on the week while a lack of interest from restockers in NSW saw the indicator drop 69¢.

Mutton prices have started moving towards the winter price peak as supply wanes. The National Mutton Indicator at 620¢/kg cwt, while below the same time last year (661¢/kg cwt), is as strong as we’ve seen since January.

We’ve been saying for a while now there’s more upside to lamb as the fundamentals are there for price support. As reported in this weeks articles section on Mecardo,  tighter sheep supply is another one of those factors, as more space is made for lambs on the kill floor. 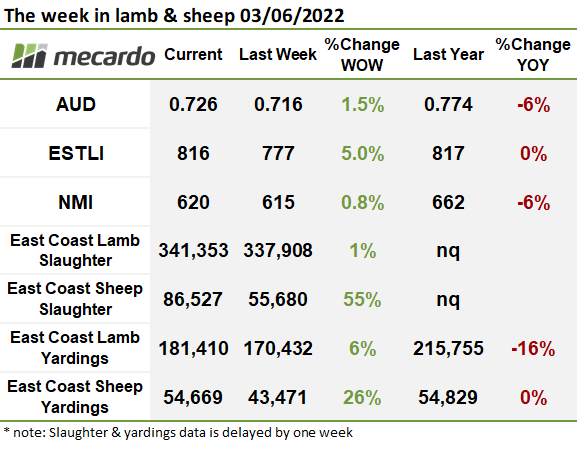 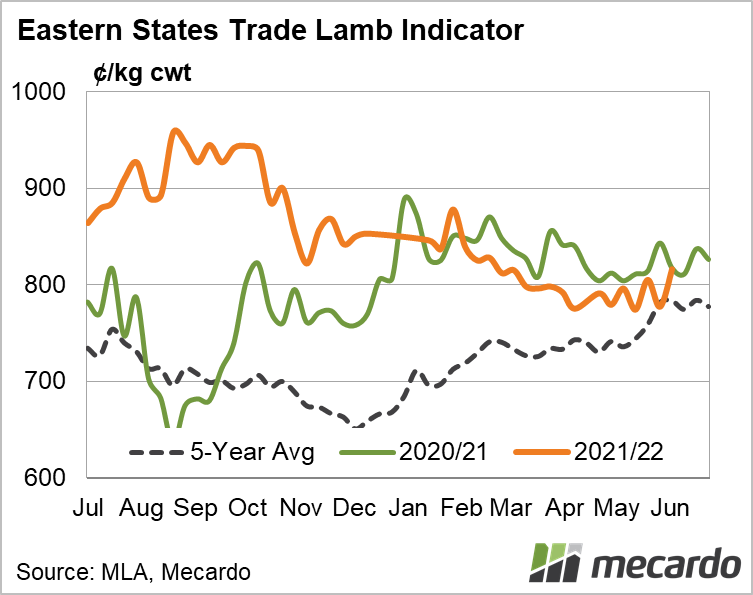