Sales continued on from the negative opening post-winter recess, with exporters reporting that a lack of confidence was dampening their activity. Sellers responded to the falls of last week reducing the offering by 15,000 bales which no doubt assisted in limiting the damage this week.

Across the week, the Eastern Market Indicator (EMI) gave up another 37ȼ to settle at 1,335ȼ, a 2.7% reduction. The Australian dollar was again weaker by US$0.01 compared to the previous sales at US$0.726, however as with last week this was unable to support the market with the EMI in US dollar terms down 41ȼ or 4.0% to 970ȼ.

There was a much-reduced offering in response to last week’s falls, however after 7.3% of the roster were withdrawn just 34,425 bales were offered. With 28.5% of the offering passed in, by the close of selling Thursday 24,618 bales were sold. This was 7,807 fewer than the 32,839 sold last week, the lowest clearance since September last year.

AWEX reported that Fremantle only offered 4,088 bales and with a pass-in rate of 58.2%, only 1,707 bales were sold. This was the lowest weekly sold figure since AWEX commenced recording in season 1997/98. With the prospects for a very good grain harvest in the west, it is likely that wool growers will continue to withhold wool from sale in Fremantle in the coming weeks, or until the market stabilizes.

The price reductions were mainly felt on day one, which resulted in increased withdrawals of wool for Thursday, and with the continued high pass-in rate it resulted in buyers increasing their bidding for the available lots.

The crossbred indicators were cheaper although falls were less in percentage terms than the rest of the market, giving up 8 to 20 cents. Notably the 28 MPG was down 20 cents in Sydney and 11 cents in Melbourne.

Cardings fell 28ȼ in Melbourne, 23ȼ in Sydney, with Fremantle reporting no change for the week.

This week on Mecardo, Andrew Woods looked at the discounts for vegetable matter which normally reach a seasonal maximum early in the season, with supply generally near a peak. (view article here). Discounts for VM levels above 2% are likely to shrink as sales move into the spring and the supply of vegetable matter in fresh shorn wool falls.

Next week an offering of 32,343 bales are rostered, with only Melbourne & Sydney selling on Tuesday & Wednesday. 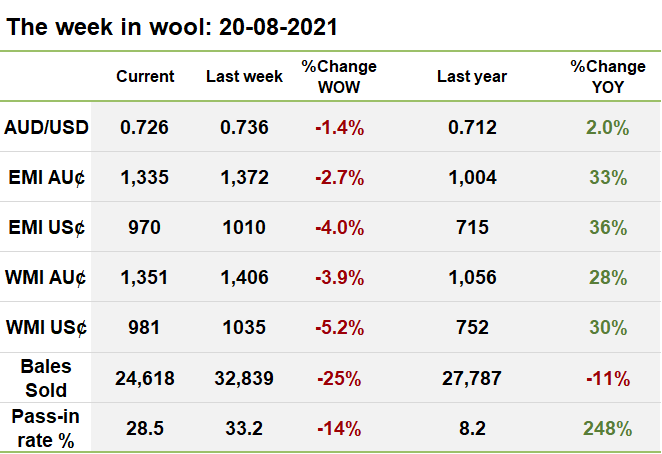