The cattle market suffered yet another week of consecutive losses, with the EYCI falling below 900¢/kg for the first time since June 2021. Most worrying about the result this week as that the issue was not high supply, as that fell this week, leaving us to deduce that the price fall is a symptom of a nasty nosedive in underlying demand.

Similar to last week, the bright spot in an otherwise depressing market was that slaughter volumes are on the rise. East coast slaughter for the week ending 22nd July rose another 2% week on week, with most of the momentum coming out of QLD, where volumes increased 5%, helped along by VIC ramping up 2%.

EYCI Eligible yardings plummeted by 34% this week to 10,536 head- the lowest volume we have seen in the last six weeks, with the only exception being a rainstorm and flooding impacted week in early July. Similarly, restocker steer volumes were down 52% and feeder steers down 29% to 5,117 head. All this is indicative that this weeks yarding was substantially smaller, and will most probably clock in at well under 40,000 head.  As expected, the official East coast yardings numbers for last week were the highest seen all year, at 49,037 head.

Despite the substantially decreased supply in the market this week, the EYCI could not be saved from its downward spiral.  It lost 60¢(6%) to plunge down below the 900¢ barrier to languish at 888¢/kg cwt. The index has not been at such a low level since June 2021. Prices are still good in a historical sense, but the question is how much further the market could fall in the coming months.

In the west, the WYCI recovered slightly from the last couple of horror weeks, gaining a tentative 19¢(2%) week on week, settling at 910¢/kg cwt. The advance was helped along by a 27% reduction in yardings to 239 head for the week, while the ealer proportion dropped to 35%. Yearling steers traded at 971¢/kg cwt, up a huge 17% from the prior week. At Muchea, it was reported that processors were jostling aggressively to pick up cattle.

Seeing the national cattle indicators all lit up in red each week has become an expected occurrence, with restocker steers taking the largest hit this week, slipping 7.4% down to 525¢/kg cwt. Heavy steers also took another tumble, to 403¢/kg, but bear in mind the thin volumes that are typically in this index, with only 128 head recorded this week.

The US frozen cow 90CL price slipped back 4¢(<2%) in US dollar terms, closing the week at 260¢/lb swt. Lower prices for domestic US lean beef, and a general seasonal slowdown in demand continue to weight on the imported beef market in the USA. US cow slaughter continues to run at breakneck pace, at around 10% above the 5 year average, and 4% above last year.

Steiner also reports that all the noise about FMD risk in Australia has not been helpful to our industry, as talk among the trade there is that US buyers are also starting to get nervous about committing to Aussie products given the potential for supply to be brutally cut off. The upshot of this is that some US buyers may be exploring the viability of other options to ensure continuity of supply.

This week’s downward spiraling price trajectory, coupled with pretty firm indications that it’s not supply driven is a very concerning situation. Clearly, the appetite for young cattle has dropped off, and we will need some good news on the weather or international macroeconomic front to help improve sentiment. If supply suddenly lifts again next week, given the slack demand environment currently, we might need to brace ourselves for some even steeper falls 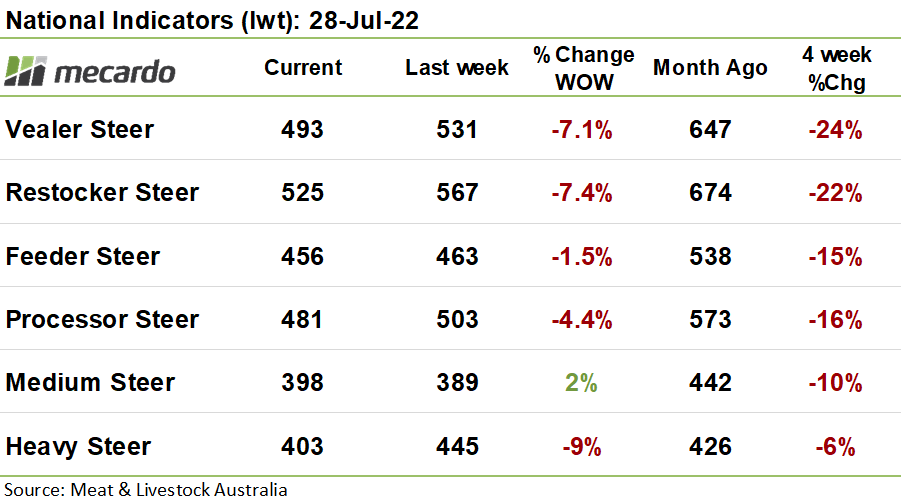 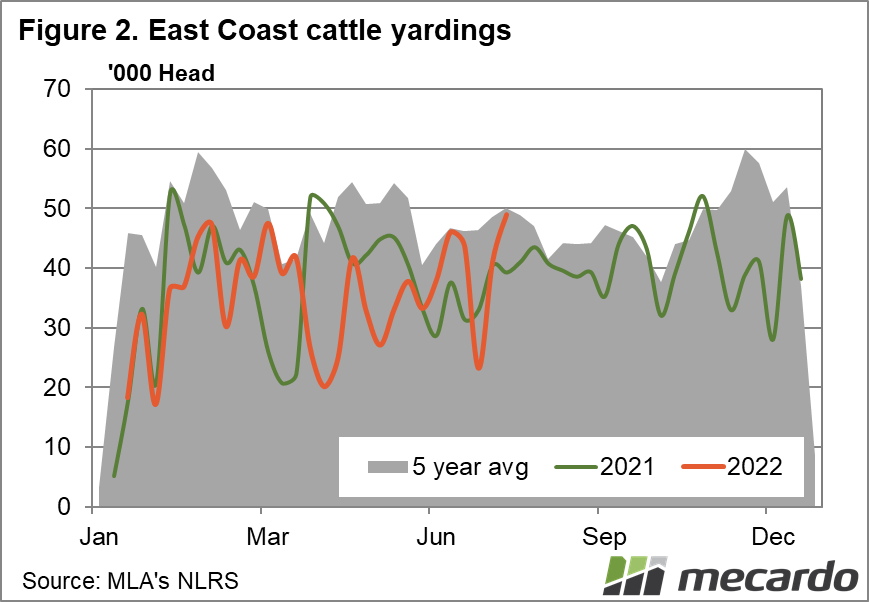