Has the cavalry arrived? UN to the rescue.

The brakes were put on commodity markets in the past couple of sessions as a raft of economic data shows slowing growth causing investors across a slew of stocks and commodities to dump and run.

Specifically for the ag commodities, news that the UN was busy negotiating with Russia and Ukraine to try and avert a humanitarian crisis brought on by the war, has seen wheat and corn tumble.  The premise of the negotiations is to allow Ukrainian exports through the Black Sea and grant Russian exports of fertiliser. It is thought that Russia will play nice if some of the economic sanctions are lifted. It shows how tightly wound these markets are.  The fact that the mere suggestion of a ‘work around’ can see 69ȼ/bu or AU$39/t stripped from the Dec ’22 contract, since Wednesday, is quite extraordinary.

The question has to be asked though, is this the beginning of a major correction?  The fundamentals of production remain bullish.  The ongoing war in Ukraine, historically low yield estimates in US HRW country, Indian wheat production cut, French drought issues etc etc.  But the other side of the coin is demand.  Are we seeing a tipping point in the market, where buyers simply evaporate because of high prices, credit issues or switching to lower cost alternatives (i.e. rice).

After seemingly endless bullish stories, is the market finding some balance?

Russian analyst SovEcon has lifted Russian production to a whopping 88.6mmt, citing average yields over 4t/ha.  USDA has Russia at 80mmt, but an ideal season and no shortage of fertiliser and inputs, is giving rise to a potential record crop.  This in itself could provide a very logical answer to the demand situation mentioned above.  Buyers may simply have to tighten their belts for the next month or so until a sizeable Russian crop becomes available.  The next question will be can they meet the export pace required to move the 44mmt export target?

Changing topic slightly, the US farmer was able to crack the whip this past week and made up some lost time in their seeders.  Major corn producing states Iowa and Illinois are now at 57% and 54% completed, up from 14% and 15% last week.  They are still well beind average, but the gains made in the past week demonstrate that the crop can get in the ground quickly when conditions suit.  Another couple of good sowing days are ahead before weather turns wetter again in the corn belt, which should see another big swathe of corn country get seeded.  Sentiment in the corn market has softened a little as it appears that the crop will get planted and there is plenty of moisture.

There are a lot of moving pieces to this puzzle.  After a sizeable correction, we may see buyers re-emerge.  There is still plenty of support in the wheat market, but I guess the one thing we can take from this week is that nothing goes up forever. 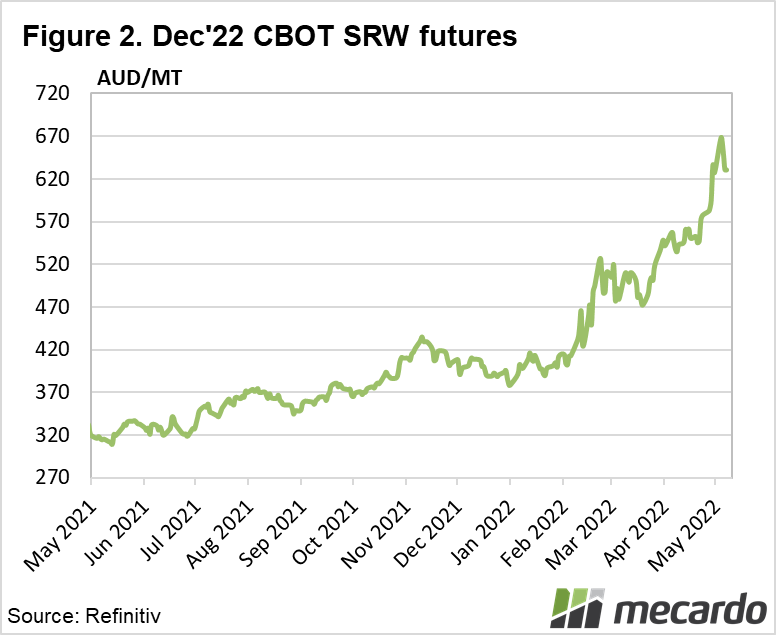