Heavy steers reach for the moon

The Eastern Young Cattle Indicator (EYCI) has continued on its recovery trajectory, cracking 1,000¢/kg again. Heavy steer prices also jumped an incredible 9% in the past week, reaching a new all-time record. This lent solid fundamental support to the current high valuations of young cattle, lets hope those prices can hold well down the track when it comes to turnoff time.

Yardings advanced another 6% on the week prior, with the lion’s share of the lift coming out of NSW, albeit offset by reductions in numbers offered in QLD and SA. A total of 43,577 head were yarded on the east coast for the week ending 6th of August, 2021, up 2,455 head from the week prior.

East coast slaughter backpedalled again last week, which is fairly in line with the usual historical trend at this time of year, with the 3% drop driven by reductions in QLD and NSW. 92,309 head of cattle were slaughtered for in the week ending 6th August 2021, which was down 2,445  head on the week prior.

The EYCI continued to push upwards and onwards by 6¢(<1%) for the week, getting up and over the 1000¢ barrier again to reach 1,003¢/kg cwt. Not quite a new record, but that’s not to say we won’t see more upward momentum next week. Roma Store posted average prices of 1010¢/kg cwt, while Wagga clocked in at 1020¢/kg cwt, with prices helped along by tighter supply, with eligible cattle numbers down 8% to 11,809 head.  A substantial price separation between north and south exists however, with Shepparton, Warrnambool, Pakenham, Bairnsdale and Wodonga cattle trading at a range between 910 and 970¢/kg cwt, though collectively, these selling centres make up less than a 5% contribution to the EYCI index.

The Aussie dollar slipped 0.3% for the week to 0.733US. The dollar’s up and down movement during the week was related to high, but transitory CPI numbers coming out of the US, and jitters over potentially slowing Chinese demand as more information is released about intended updates to the 5-year plan.

US 90CL frozen cow prices climbed 8¢(<1%) to 800¢/kg swt. Steiner reports that the price lift was related to a return to more aggressive buying in US wholesale markets, with imported beef inventories tightening, against a general backdrop of the US choice cutout rising 12% since late July.

The week ahead is looking relatively dry for most of the country, with VIC and South East NSW receiving 5-10mm, and a smattering of rain extending down the coast from southern QLD. The sustained recovery in the EYCI, coupled with the big lift in heavy cattle values is likely to provide a big boost for producer confidence next week. Any new records set next week definitely won’t come as a huge surprise. 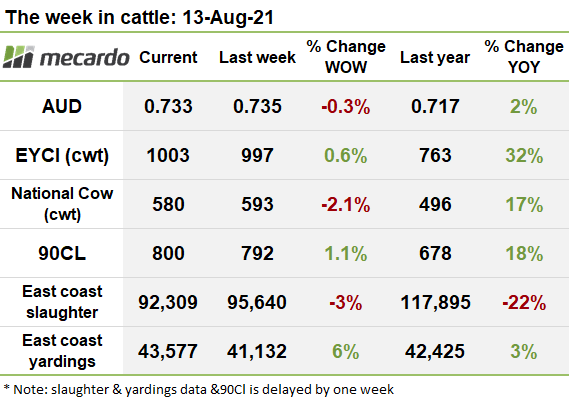 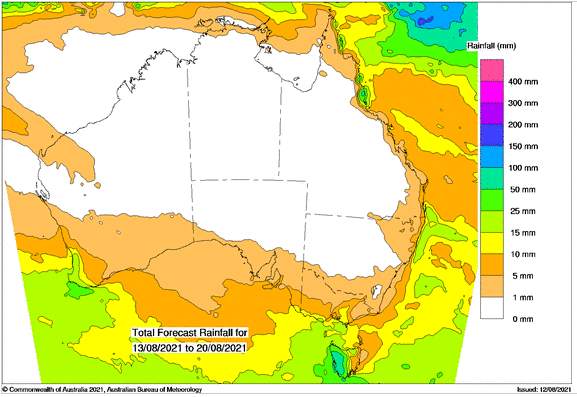