Lamb exports finding a home for now, but at cheaper prices

Despite plenty of anecdotal reports around weakening demand for lamb in export markets, July exports number showed similar levels to last year. Delving a bit deeper into the market we find that weakening demand is likely showing up in price, not in volume. This is especially the case in the US.

With July typically being a low lamb slaughter month, it’s not surprising to see total lamb exports nudging lower month on month. It was a little surprising however to find lamb exports matching the levels of last year in July, but slaughter levels were similar, and domestic consumption is fairly static so the lamb had to go somewhere.

Figure 1 shows lamb exports in July were very close to both last year’s levels, and the five-year average. Lamb exports were actually up 1% and 2% on last year and the average.  Given lamb slaughter in July was similar to last year, according to Meat & Livestock Australia’s (MLA) weekly numbers, it’s not surprising to see similar export volumes.

Lamb exports were 6% lower than last month, but this was also a factor of slaughter, which was lower in July.

The most interesting figures came out of the US. Figure 2 shows the US market took 4% more lamb in July than in June and lifted its share of exports to 25%. Compared to July 2019 the US took 51% more lamb in July. We looked a bit closer at US exports, expecting to see strong frozen exports, and this was the case. Exports of frozen lamb to the US were up 66% on July last year, but chilled exports also gained plenty of ground, up 41%.

With the US taking more lamb, somewhere had to lose ground.  China was still our biggest market, with similar exports to last year, but the Middle East continues to languish.  Lamb exports to Middle Eastern markets came in 16% lower than last year, and 29% lower than the five-year average. They did show some recovery however, being 13% stronger than June.

Lamb exports have performed reasonably well despite the COVID issues, but it seems the worst is still to come. Figure 3 shows the prices of Chilled Racks and Frozen Legs. The legs have gained some value, but it is nothing compared to the fall in high-value racks.

The concern is how processors are going to move 35% more racks, along with other cuts, when lamb supply hits its peak in the spring. The Aussie dollar is now 7% higher than before the crisis started, which is adding further pressure to export values. 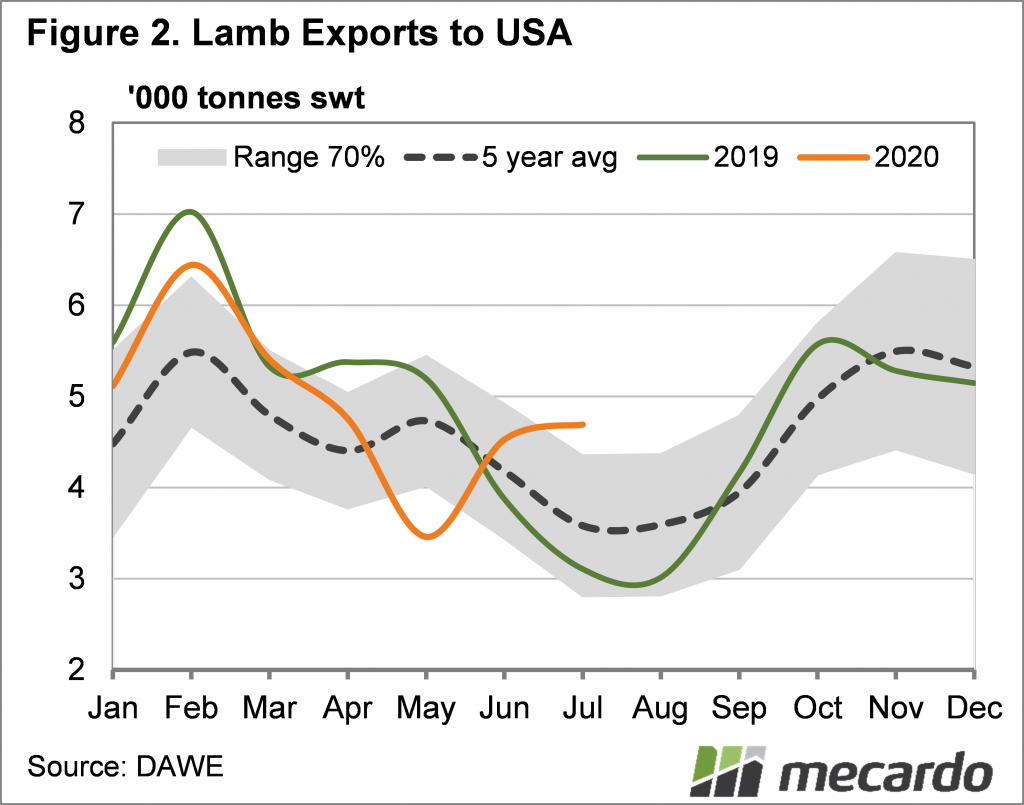 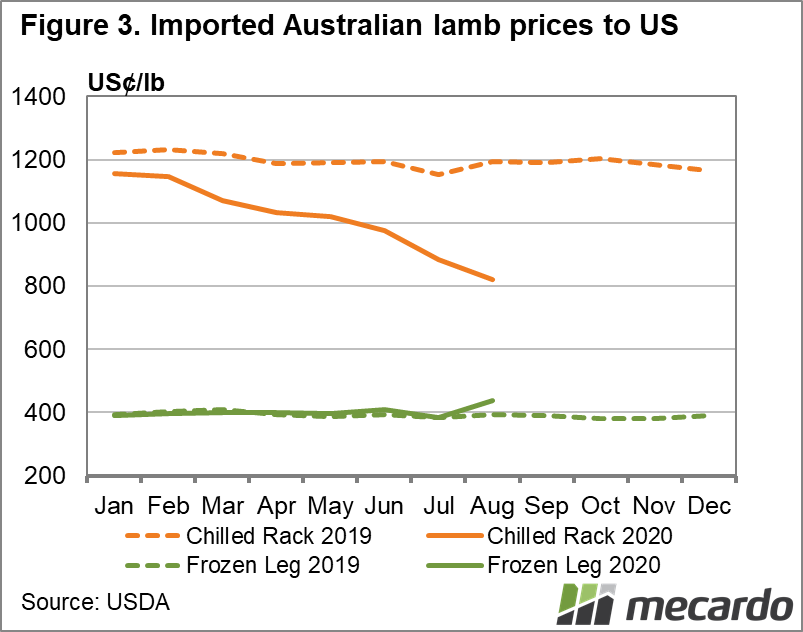