Market opens with falls across the board

The final sale before the three-week recess had an air of confidence with over 42,000 bales sold into a market that was fairly solid. The opening sale post the winter break was anything but solid, large falls across all categories as well as big grower withdrawals and pass-in rates.

The west was also down in line with the EMI, with the Western Market Indicator (WMI) falling also by 56ȼ to finish at 1406ȼ.

A large offering was presented, which isn’t unusual following the winter recess, however after 7.3% of the roster were withdrawn 49,181 bales were offered. Overlaying the high pass-in rate of 33.2%, by the close of selling Thursday 32,839 bales were sold. This was 9,660 fewer than the 42,441 in the sale before the break.

Reports from exporters were that COVID-19 problems were again impacting wool processing mills in China, with the important region west of Shanghai significantly impacted.

No indicators were spared, and AWEX reported these falls were felt across the skirtings sections as well. The biggest falls were in the fine end, with the 16.5 MPG in Melbourne most impacted dropping 136 cents.

The crossbred indicators were also in reverse this week, giving up 21 to 38 cents. Notably the 30 MPG was down 25 cents in Sydney and 30 cents in Melbourne.

Cardings fell 30ȼ in Melbourne, 45ȼ in Sydney with Fremantle giving up 61ȼ for the week.

This week on Mecardo, Andrew Woods looked at the early season wool price performance in recent years (view article here). The 19 MPG has fallen by 22-23% during August/September of the past two seasons, however it has subsequently regained half or more of the fall in price by late September/October.

Forward prices are holding at present so any possible weakness in price is being called as short term by the forward market.

Next week an offering of 41,284 bales are rostered, there will be concerns regarding the depth of buying orders based on this weeks results. Growers are expected to withdraw and wait and see when demand returns. 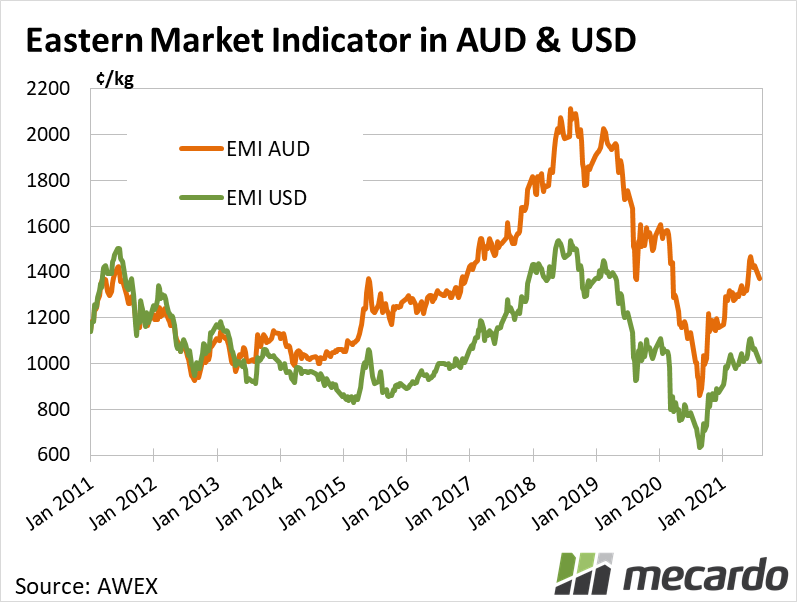