All eyes are on the Eastern Young Cattle Indicator, with record highs becoming the norm so far in 2021. Just five years ago avid EYCI followers were waiting anxiously for the indicator to break the 600ȼ/kg barrier, and now 1000ȼ/kg seems inevitable. Last week we had an in-depth look at the EYCI including its premium to the 90CL (the US imported beef indicator) price. And the 90CL offers plenty of insights into the beef market by itself, both here and abroad.

Currently sitting at 789ȼ/kg, the 90CL price in Australian dollars has been on the rise since March, hitting its highest point for 2021 so far, a fortnight ago, at 790.5ȼ/kg. After opening the year at 614ȼ/kg, it has risen 33% since January, or 12% since the beginning of May. Given the US was headed towards a summer of barbecuing and grilling, it isn’t unusual for the 90CL to increase in line with domestic US prices during that period (May-July). Now past its summer peak, the US domestic cutout prices have started to decrease, however are still well above the same time last year. The 90CL price is also up year-on-year, trading 15% higher, and historically very strong, as we can see in Figure 1.

This is partly down to supply, with much less Australian beef to export this year. The Steiner Consulting Group’s weekly US imported markets update predicts July shipments from Australia to the US will be higher than the previous month, but still 35% short of the volumes shipped in 2020. They show how current volumes compare historically, and not only are they well down year-on-year and on the five-year average, but they’ve also been below the volumes sent a decade ago in 2011. However, this void is partly being filled by Brazil, who have more product available and at a cheaper price point, limiting further supply-influence upside for Australia.

With cow supplies still very tight when it comes to saleyard throughput and another month of winter to go, a falling 90CL price is not likely to put too much pressure on domestic cattle prices in the short term. That said, if the supply dearth continues pushing medium cow prices higher and tightening its spread with the 90CL, it will leave scope for our competitors with lower price points to further increase market share in the US. 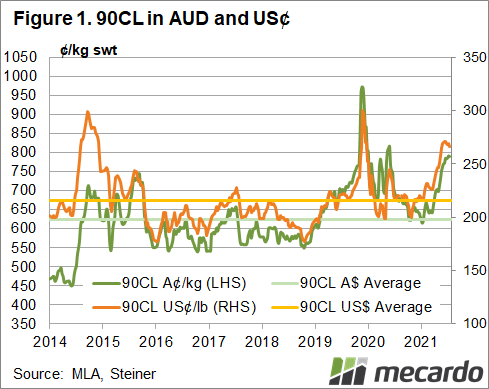