Official cattle slaughter numbers are unsurprisingly lower compared to the average, but the month to month reduction was softer than we’ve seen recently. Female slaughter rates are still high, a clear indicator of the pull of good prices paid by hungry restockers and processors.

Australian Bureau of Statistics National cattle slaughter numbers for June 2020, at 611,900 head (Figure 1) are still relatively strong for this time of the year, booking only two thirds of the usual month on month fall from May to June, compared to the five-year average seasonal pattern of an 8% decline.

The overall reduction in numbers was led by QLD and VIC, which respectively slaughtered 23K (12%) and 17K (7%) less than in May. These declines were offset by lifts in the more minor states of SA and WA which chalked up increases of 3.1K (20%) and 2.4K (9%) respectively. The trend-bucking increases seen in SA and WA are somewhat uncharacteristic, as they tend to follow in the general direction of the larger states at this time of the year.

The national Female Slaughter Ratio (FSR) ticked up a smidgen from last month, at 55.6%, (Figure 2) which is well and truly above the 47% threshold that indicates a move into a sustainable herd rebuild phase. However, when we delve into the numbers, we can see exactly where the liquidation of our herd’s girls is happening.

Victoria’s FSR landed at 68% for June-20. This is down from an astronomical 73.4% last month, but in general, Victoria’s rate has been generally trending upwards for years, and not showing much sign of abating, unless we see another drop for the next few months (Figure 3). The deliciously high prices compared to recent years appear too attractive to pass up for Victorian producers.

WA is also insatiably eating into its stocks of female cattle, showing an FSR that even rivalled Victoria’s last month, at 68.5%.  In line with the Victorian situation, its rate has also been climbing higher over time. Considering its geographic isolation from more significant herds in other states, any rebuild relies heavily on breeding up locally.

VIC and WA cattle slaughter have accounted for around 16% and 4% of average annual national kill figures.

In contrast, NSW, QLD and SA, which collectively represent the remaining 80% of Aussie production, all display substantially more sustainable female kill rates, with NSW June-20 FSR at 52.8%, with QLD and SA down at a more even 50% and 49%. Even so, these need to reduce further if we are to see the herd as a whole grow in years to come.

With slaughter numbers still strong (relatively speaking), and the female slaughter ratio being maintained at high levels above the notionally required herd rebuild level, the Australian herd will continue to decline until we see a significant turnaround. This will continue to fuel ongoing tightening supply, creating a medium-term upward support for prices. 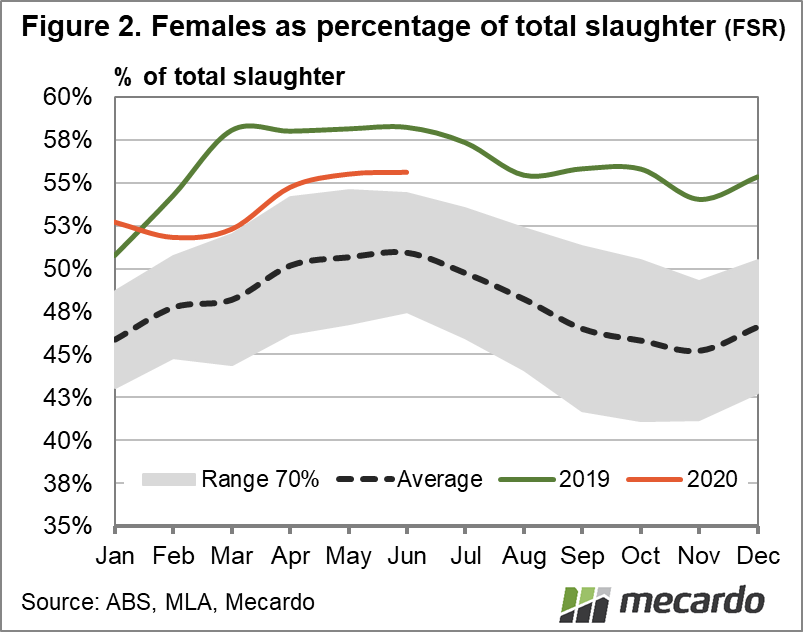 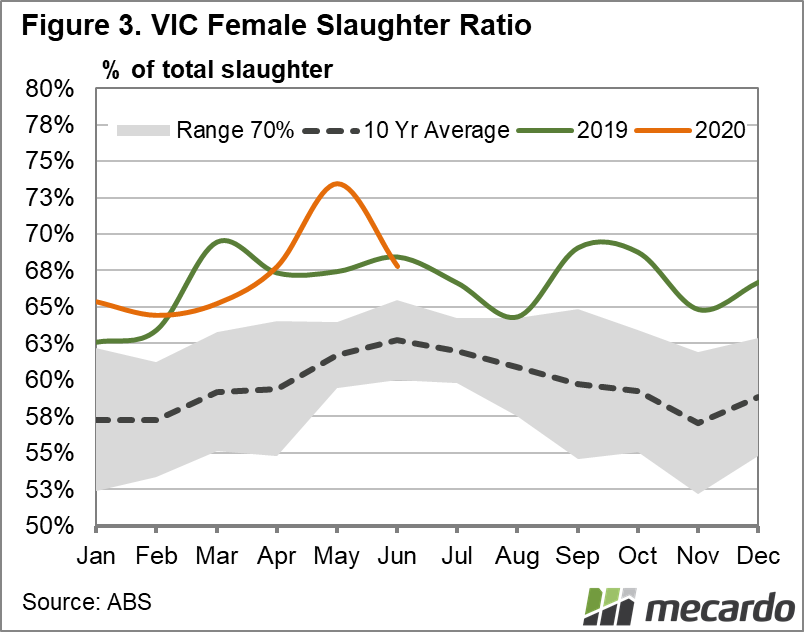