Summer cropping is a long way off for Australia at this stage, but it is worth considering the most recent global supply demand balance outlook. A smaller aussie and US crop, in the face of solid Chinese feed demand.

ABARES predicts that the planted area for Australian sorghum in 2022/23 will contract by 5% to 592 KHa and that the harvest will fall to 29% to 1.93 million tons. The fall in estimated production is driven by a sharp 26% downgrade in forecast expected yields from 4.37 mt/Ha to 3.25 Mt/Ha. The USDA tips Aussie Sorghum exports to fall by a whopping 42% back down to 1.1mmt, in parallel with the 800kt downgrade in forecast production. (figure 1)

Domestic prices for Aussie sorghum have mirrored the general downward trend that cereals and oilseeds have followed globally, with No. 1 old crop Brisbane sorghum prices falling $57(15%) from their highs in June to sit at around $323/ton currently.  (figure 2)

Quality discounts in Australia for Brisbane old crop No. 2 sorghum have widened since reaching their smallest point in late May of a 6% penalty, increasing to a 15% spread currently, which is closer to the range we saw at harvest time for early planted crops on the downs this year, where the discount hovered around the 18% mark. That said, the relative price disadvantage for lower quality sorghum is still in a better position than what was endured in 2021, where discounts were consistently above 17%, and reached as high as 34% in October. (figure 3)

Current long range forecasts for the Australian summer period are still indicative of high potential for a wetter end to summer, with a 65% chance of a return to a La Nina influenced system by December, falling to a 35% chance by March. As a result, there remains a significant chance that more flooding and pouring rain in 2023 could impact the crop again at the worst of times. That said, a tighter supply/demand balance in international trade may result in lower quality discounts being applicable, with China’s demand remaining at healthily insatiable levels.

China imports Australian sorghum for their pork & dairy industry, and to produce ducks with statistically larger gizzards. Liquor production to make Baiju, a whiskey-like distilled high proof liquor, is estimated to utilise up to 2.8mmtpa, or 22% of total consumption.

The year on year 9.5% reduction in USDA forecasts of Chinese Sorghum imports for 2022/23 down to 9.5mmt is not reflective of a decrease in demand, but rather a contraction in supply of exportable sorghum from Australia and the US. Total US sorghum export volumes are expected to contract by 2% year on year in 2022/23, with volumes sent to China reducing in line with that trend. (figure 4)

Although forecast world sorghum production is expected to increase marginally to 62.43mmt, the lift in sorghum plantings and harvest volumes this year by African countries such as Sudan, Niger, Nigeria and Mali are expected to be utilized for domestic human consumption, and not enter world export markets. As a result, the global exportable surplus is tipped to shrink by 7.3% to 11.2mmt, driven mostly by the fall in Australia and the US, offset slightly by a 100kt increment in expected Argentinian exports, which is also a major Chinese supplier

An expected smaller sorghum crop from both Australia and the USA has set the stage for a tighter supply/demand balance in 2022/23, which could support prices. Similarly, the tighter global export market and reduced Australian production could lead less severe price penalties for lower quality crops, although the weather situation for next year is still looking decidedly dicey. 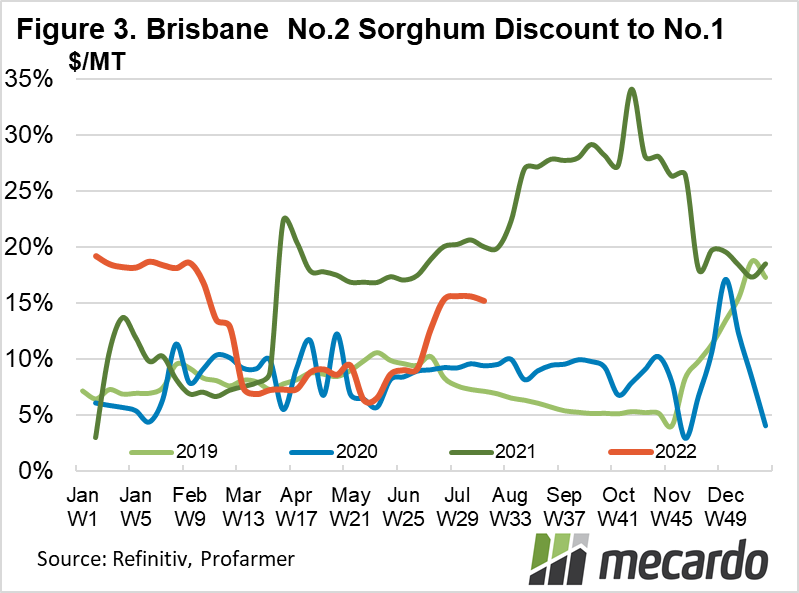 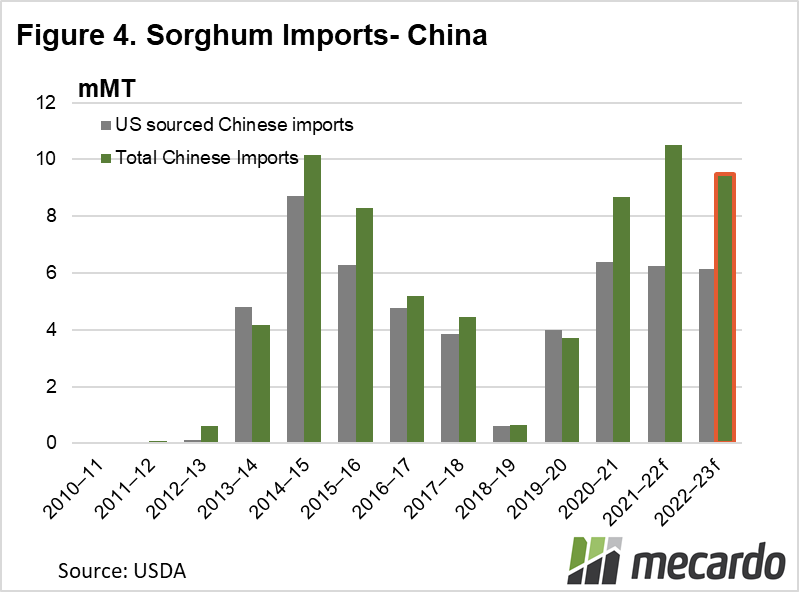