After a slight lift in September, Australia’s beef exports have fallen again in October, remaining well below year-ago levels. However, the latest beef export value data (August) is the highest it has been since May 2020, showing high values are going someway to make up for the lower volumes. South Korea has increased both its import volume and market share of Australian beef, while two of Australia’s traditionally top three beef customers - the US and China - have dropped considerably.

Looking at markets moving in the right direction first, South Korea has received 3% more Australian beef for the year-to-October compared to the same period last year. South Korea’s market share has also increased 3% on 2020, sitting at 17.91% – the highest it has been since at least 2006, and making it the second largest market, overtaking the US and China. South Korea’s October total was the second highest monthly volume for the year – and traditionally November and December is when we see Australian beef imports increase there.

However more than 95% of Australia’s ‘free’ trade beef quota to South Korea was filled as of the start of November, meaning tariffs in this market could increase within weeks. The Korean-Australian Free Trade Agreement (KAFTA) allows for Australia to send 177,569 tonnes of beef to South Korea (in 2021) at a 18.6% duty rate, with anything over this being charged at 30% for the remainder of the year. Hitting the full quota is not unusual, and it has happened each year since the agreement came into force in 2014. But it will put the tariff on Australian beef at 16.7% above the US beef tariff for the rest of 2021.

Volumes to Japan are 11% lower year-on-year, but it remains Australia’s biggest beef market with more than a quarter share – and it has made up for some of the decrease experienced in the first six months of the year, having been down 19% to the end of June. It is also the highest valued market, with the value of Australian beef sent to Japan the most expensive month since May 2020. Volumes to the US have fallen more considerably in 2021, down 44% for the year-to-October. Their market share has dipped from 21.3% in 2020 to 16.7% this year. A lack of supply out of Australia – especially of the cull cows commonly turned into lean ground beef for the US hamburger market – and the export price of 90CL beef being 24% higher than the same time last year, have contributed to the decline.

We have been expecting high domestic prices and tight supply to have an impact on Australian beef export markets. The reshuffle of market share does show a shift in global trade, with the US not only importing significantly less Australian beef, but increasing their exports to two of Australia’s top markets – Japan and China.

While US exports to South Korea (traditionally the US’ second largest beef market) were well down in comparison, their tariff advantage could impact that for the remainder of the year. 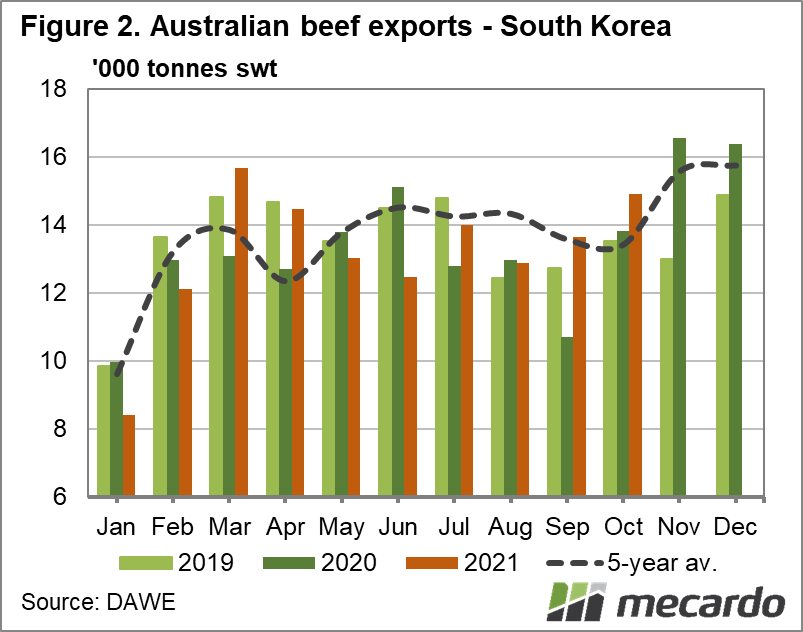 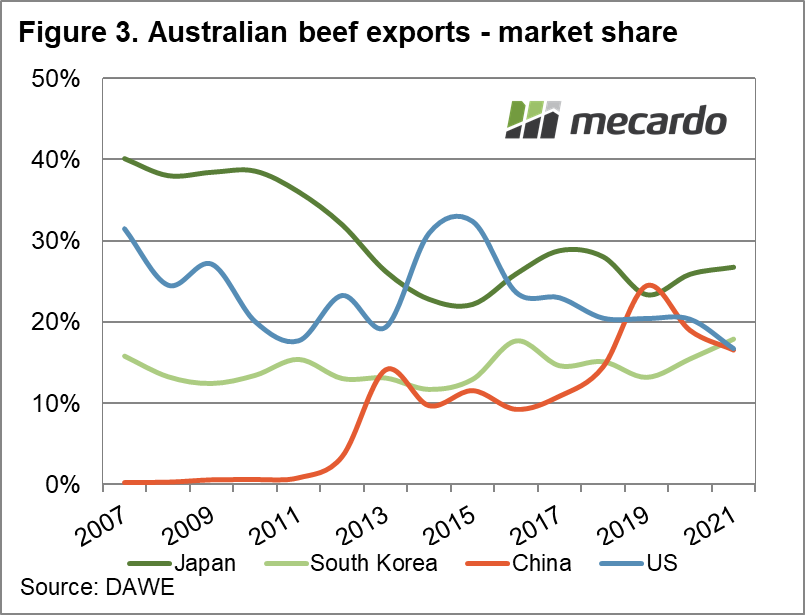