Weaners worth it? We’ll have to wait and see.

Mountain calves were the talk of the young cattle market last week, as buyers headed up the hill to Victoria’s annual offering of weaners in the high country. And once again sellers were not disappointed with the strength seen at earlier feature sales very much continuing. Buyers holding out in hope the market may have come off the boil by the time these sales rolled around would have been disappointed though. This year’s reporting of the two days of sales at Omeo, Ensay, Benambra and Hinnomunjie uses many of the same descriptors as 2020 - ‘red hot’, ‘grass fever’ and ‘record-breaking’. The difference? This year was even dearer.

At last year’s Mountain Calf offering, the Eastern Young Cattle Indicator had begun it’s climb, with much needed rain having started to fall across areas of the east coast. The week prior to the sales event in 2020 the EYCI had hit a new record of 744.25¢/kg carcass weight, and the uptick in confidence meant averages were close to double from the 2019 sales to the 2020 sales. This year, the EYCI record was broken a month earlier (it reached 888.25¢/kg on January 28) and again price averages rose – for instance the steer yarding at Hinnomunjie, the first sale of the series, averaged $1279 in 2020, while in 2021 it averaged $1746. That’s an increase of 27 per cent.

The lightest lots smashed the record books on a cents per kilogram basis – with Meat and Livestock Australia’s National Livestock Reporting Service reporting Angus and black baldy steers under 200kg reached a high of 967¢/kg live weight at Omeo and Benambra, and averaged 850¢/kg. The weaner steers of all breeds that weighed over 330kg averaged 515¢/kg. To put this into perspective, if we translate the EYCI into liveweight terms, it was sitting at 463¢/kg lwt last week.

In comparison, the National Heavy Steer Indicator was at 370¢/kg last Friday, 20% below the EYCI. The EYCI has been sitting at around 20 per cent higher than the National Heavy Steer Indicator since mid-December. As we can see in Figure 2, this is the biggest gap in the two indicator prices since the EYCI began rocketing higher in March last and the spread widened. Figure 2 also shows us the gap began to lessen as we headed into winter last year, and historically this is the case. As the winter supply crunch is no doubt on the horizon, this year should be no different.

If you’ve paid top-dollar for high-quality heifers to turn into breeding units by the spring, then they are rarely too dear. If you’ve got an abundance of good feed coming on very soon with a short-term turnover plan, then the margins should still be there for you, albeit tighter then you might like. But waiting may not have got you anywhere anyway, as getting your hands on the right product could become an issue as supply seasonally tightens. Playing the long-game with steers? We’ll have to wait and see. 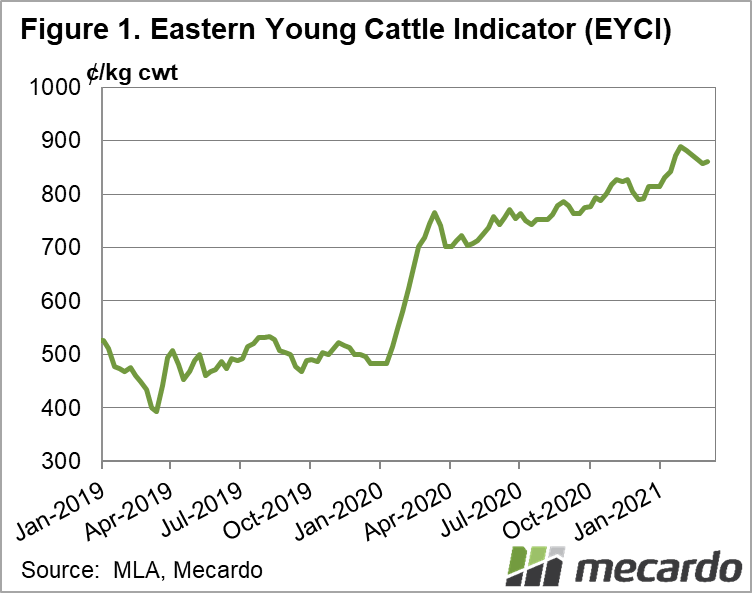