As we approach three quarter time in 2020, we can run our regular analysis of what is left for lamb slaughter. We know the season will help dictate how many lambs are slaughtered in the last three months of the year, but it’s still worth taking a look at annual projections, and assessing what they mean for upcoming supply.

Lamb slaughter managed another lift last week, on the east coast managing to move above the same time last year.  The trend dragged September to date lamb slaughter 1% higher than 2019, and if it continues, it will be the third month in a row.

Figure 1 shows that lamb slaughter to June was 12% lower than 2019.  However, we’ve estimated July to September lamb slaughter is going to be around 3% higher than 2019.  It seems counter intuitive given the ordinary prices, and slaughter restrictions in Victoria, but it has been helped by much lower sheep slaughter.

If we take Meat & Livestock Australia’s (MLA) annual lamb slaughter forecast of 20.6 million head, and deduct the 14.8 million head already slaughtered, it leaves us with 5.78 million head for the coming three months.

The October to December bars on figure 1 show how things will pan out if normal seasonality prevails.  We’ve got October slaughter slightly higher than last year, November 7.5% higher, and December 8% higher.  All months are still below the five year average slaughter for those months, so supply is unlikely to be excessive.

Sheep supplies have been tight since March, and will remain much tighter than last year.  Figure two shows that to reach MLA’s forecast of 6.5 million head, another 2 million will have to go over the hooks in the coming three months.

If the good season continues, it’s hard to see sheep supplies lifting to the levels shown in figure 2.  Additionally, if restrictions on Victorian sheep slaughter remain in place, slaughter space is likely to be prioritized to lambs.

Figure 3 shows that despite lamb prices picking up in recent weeks, weaker demand still sees the Eastern States Trade Lamb Indicator (ESTLI) at a 100¢ discount to the same time last year.  While it is promising to see prices rising while supply is moving higher, figure 1 shows there is still a large number to work though before the end of the year, which will keep a lid on prices. 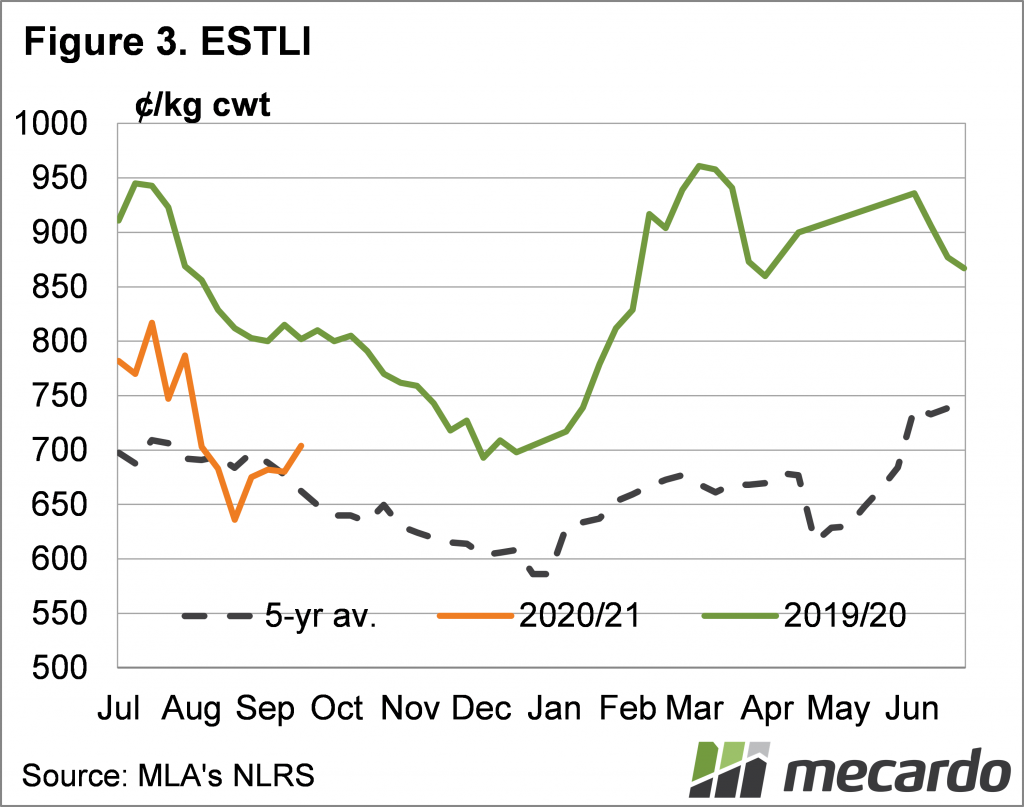