An update on the South African Merino clip

It is easy to be Australia centric when thinking about Merino supply but the other major southern hemisphere wool exporters are important supplies of Merino and non-Merino wool also. With this in mind this article takes a look at South African Merino volumes.

The South African wool market is well reported by Cape Wools SA. South African auction sale data for this article has been sourced from the Cape Wool SA website.

There is a caveat to looking at this simple comparison of total volume by micron category. The supply of South African Merino wool by staple length is relevant because the length of the South African clip is shorter due to more frequent shearing. As such, South Africa supplies more broader Merino wool than Australia.

Figure 2 shows the micron distribution of the Merino clips in South Africa and Australia for last season (2020-21). The slightly broader South African clip shows up with a greater proportion of 19-21 micron wool and much less sub-17 micron wool.

The core South African Merino micron category volumes, extending out to 21 micron, are 14% to 20% of their Australian equivalents.  When other quality criteria are overlaid the relative volumes change, as was noted above with regards to staple length. The other quality issue is non-mulesed status. Figure 4 is a copy of Figure 1 with only the non-mulesed (CM & NM) Merino sales in Australia shown. The picture changes dramatically, with South African volumes matching or exceeding the supply in Australia from 18.5 micron through to 21.5 micron. 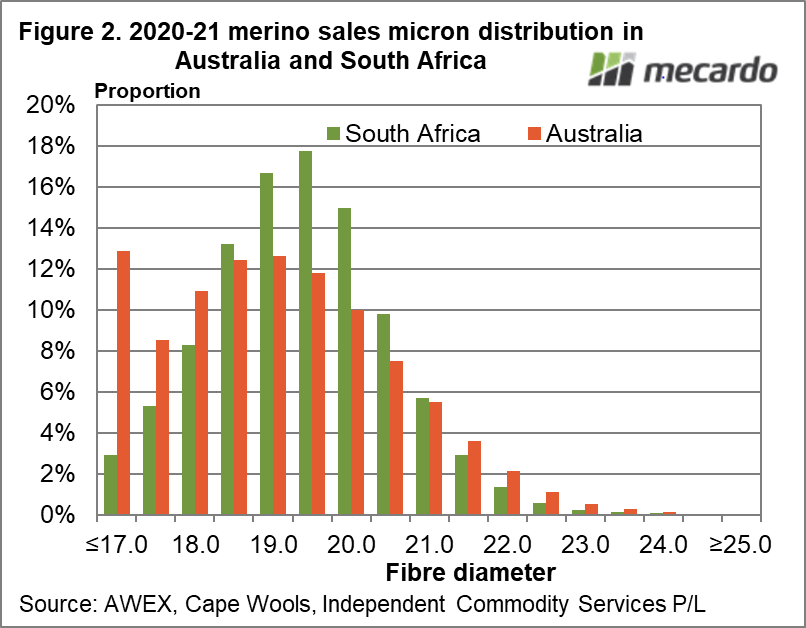