Aussie crop building to a record

Earlier this week, the December ABARES report made some revisions to Australian wheat production which weighed heavily on the market. Total wheat production is factored at 31.2mmt - the second highest on record. NSW and VIC are both looking at record production with SA expected to reap an above average crop. Based on current deliveries, WA is also on track to deliver at least an average crop.

Similarly, barley production in Australia is forecast at 12mmt, also the second largest on record.

While a +30mmt crop has long been expected, the published revision always seems to catch a few on the wrong side of the market.  This is where the crunch came – further liquidation of long/bought contracts on the basis of increasing major exporter supplies.

The wheat from Australia will go head to head against Black Sea wheat into the Middle East and Asian markets.  Russian production has been pegged at a massive 85mmt, so competition into these homes will likely be fierce.  Similarly, barley will face competition from European and Black Sea origins into key North African and Middle East markets.

In other global news, SovEcon have increased the expected Russian exports to 40.8mmt.  Traders are likely to try and speed up exports ahead of a mid Feb ’21 export quota coming into effect.  The origin of this quota is to try and limit domestic wheat and flour prices, and not a reflection of supply.  It is not expected to have any effect on prices.

Russian AgMin has forecast a record 19.3mha of winter crops have been sown, compared to last year’s 18.1mha.  IKAR have estimated that 78% of the winter crop is in fair/good condition, implying that 22% is in poor condition – the poorest since 1993.  There will remain questions around the condition of the crop as it moves into dormancy, but expectations are for another large crop in 2021.

StoneX reports that Chinese imports of wheat are up 164% to 6.7mmt.  The USDA believes that China will import 8mmt in total for this marketing year. I wonder if Australia will get a nod?

Futures and cash prices are on the slide.  Harvest pressure and building global stocks adding weight to the bears.  Demand will need to emerge to halt the slide. 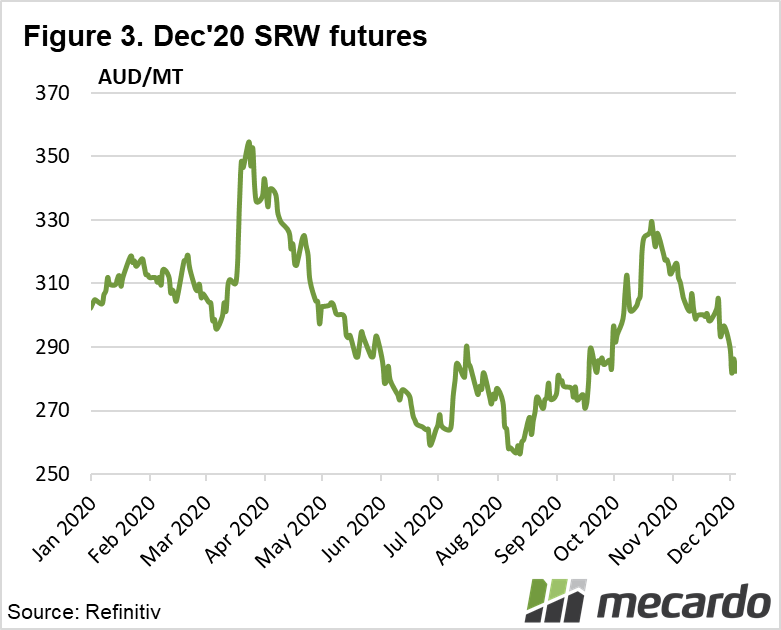