The best measure of supply for Australian greasy wool is the AWTA core test volume data (available on the excellent AWTA website). Figure 1 shows the year on year change in AWTA core test volume for wool tested by the AWTA to May 2020, beginning January 2018. The May 2020 volume was down 28.5% in farm bale terms, which is a big fall. AWTA volumes do tend to fall heavily when wool prices have fallen substantially, suggesting part of the May 2020 fall may be due to some wool being held back by farmers. The progressive fall for the full season is down a milder 8.7%.

The supply of wool as measured by AWTA core test volumes drives the volume of wool offered and sold at auction.  Figure 2 shows the monthly AWTA and auction sales volumes in farm bales from January 2018. There is a timing difference between AWTA tests and sales, especially around times of recesses in auctions at Christmas and mid-year, so the numbers never line up perfectly. Also, wool is sold outside of the auction system, further weakening the link between these two series.

Overlaid on Figure 2 is the monthly average EMI (right hand axis). Changes in the EMI have a loose correlation with the proportion of AWTA volumes sold at auction. When the EMI drops the difference between the AWTA and auction sales volumes tends to widen (less wool sold).

Figure 3 shows the proportion of AWTA volumes accounted for by auction sales volumes by season from the late 1990s, to the current season (the 11 months to May). In the past 15 years, auction sales at around 85% of AWTA volumes looks to be a “neutral” level where the cumulative level of AWTA wool not accounted for by auction is close to zero. Note the current season to May. Auctions account for only 72% of the wool tested this season so far. This implies that farmer stocks have increased by around 13% of annual production in 2019-2020. Given the fall in demand, this outcome is not surprising.

The key concern in the greasy wool market is the much-reduced demand due to the economic shock from COVID-19. Australian wool supplies are still shrinking as a consequence of drought during the past three years in parts of eastern Australia. At the same time, wool volumes cleared to the supply chain have fallen heavily with only 72% of AWTA volumes sold at auction this season compared to a standard 85%. Farmer stocks are building as a consequence (still well below the stock levels in the cotton industry). How high these stock levels become will depend on how long it takes before demand improves substantially. 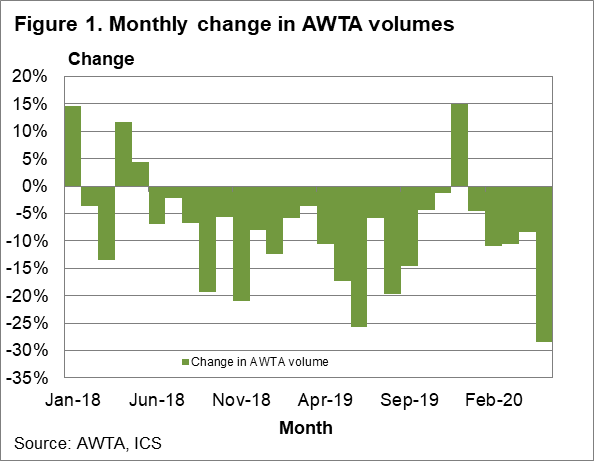 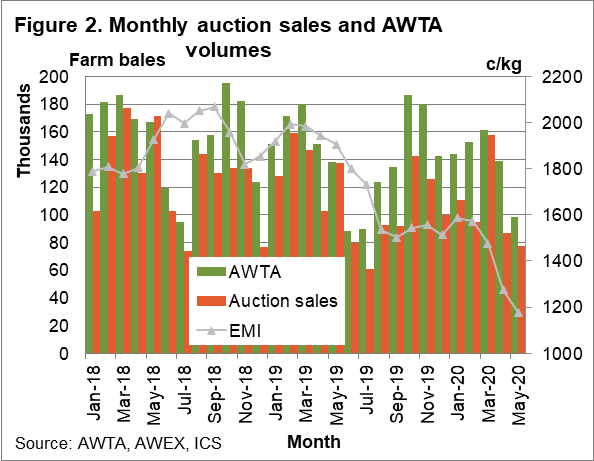 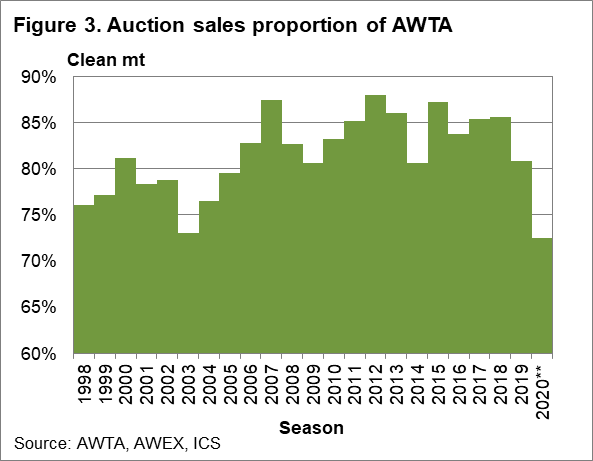