We know there is plenty of feed grain around this year. The wet harvest has downgraded plenty of wheat, to go with what is expected to be the second largest barley crop on record. Feed grain pricing is beholden to both domestic and international factors, and it’s good time for a look at how they are tracking, and what the futures market is telling us.

With a big crop and having what was our biggest barley market out of action it could be expected to see depressed prices.  As usual it depends where you are, but there are some interesting dynamics playing out at the moment.

In southern export ports BAR is priced historically well.  Geelong is close to $300, as is Port Adelaide, at $314/t.  Where the feed grain supply is strongest, in Port Kembla, BAR is closer to $250, while over in the West it is $265, at Port.

With a large exportable surplus we would expect markets to be closer in price, but local supply can sometimes push prices lower.  Quality issues with barley in NSW could also be impacting prices.

Figure 1 shows that in Geelong, barley prices are now off the high induced by the wet spell during harvest, but remain at pretty good levels compared to the last three years.  You wouldn’t find many growers that wouldn’t take record yields and a price above the 85th percentile, it makes for pretty profitable business.

Compared to ASW, barley remains close to its feed value limit.  That is the price where consumers, mostly in dairies, will use barley instead of wheat in feed rations.  The strong dairy demand in the south is likely helping to prop up prices.

In international markets barley isn’t as cheap as it was, but there is still room for improvement.  Figure 2 shows CME Corn Futures and the Geelong barley price.  Corn fell from its peak, and barley hardly moved, and we’ve seen the same with the latest corn rally.  That is, no impact on barley prices.

This tells us that barley is being driven by local factors, and specific barley demand, rather than the world feed market.  It is relatively rare for barley to be below corn, but that was when China was buying it.

Barley and feed wheat markets tend to move together, and they look to have found a base for the time being.  Local supply and demand factors appear to be driving the market, so it’s hard to see huge upside, despite the discount to corn.

In NSW, where barley is discounted to southern markets there is incentive to hold onto stock, but where it’s worth $300/t there would need to be other factors at play to hold onto it. 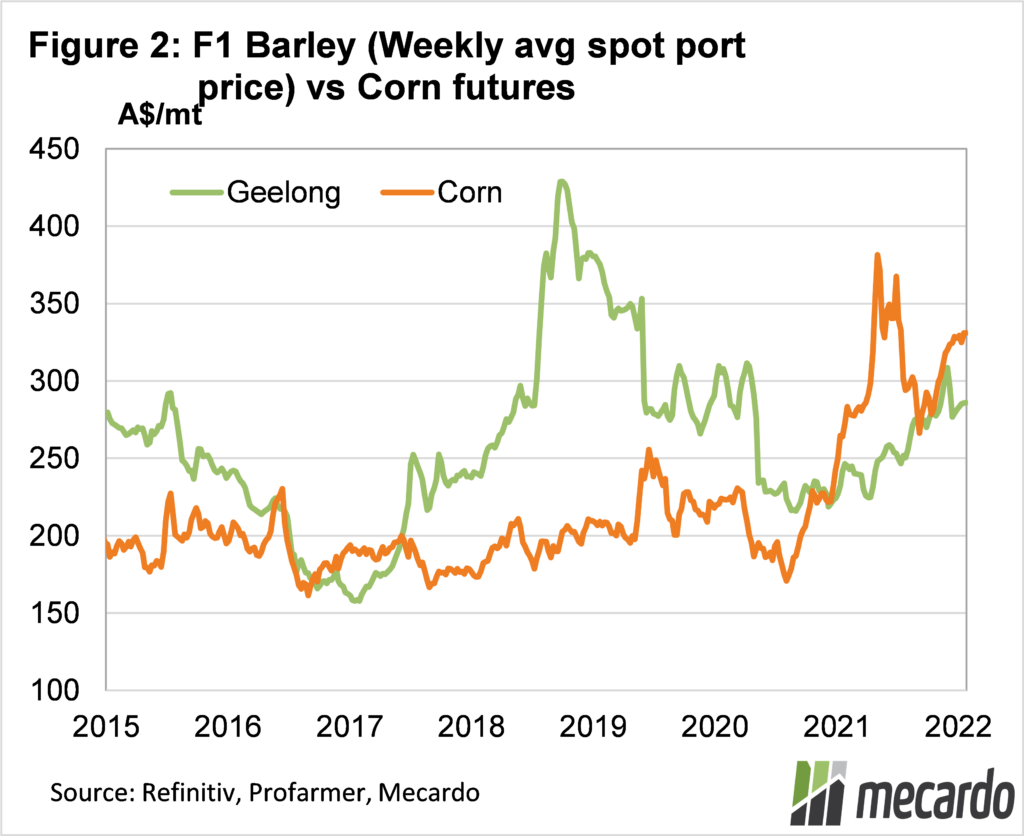