Despite the absence of slaughter activity from JBS in Australia all week resulting from shutdowns caused by cyberattacks on their IT systems, the cattle market held up reasonably well, with prices showing resilience against the disruption. The Eastern Young Cattle Indicator (EYCI) barely budging wasn’t much of a surprise though, as processors represent less than 10% of buyers for those cattle, with feeders and restockers the main players in the young cattle market.

Yardings remained steady last week, ticking up less than 1%, with NSW yardings slipping 4% while rises in QLD, VIC and SA provided more than an offsetting influence. A total of 45,130 head were yarded on the east coast for the week ending 28th May 2021, up just under 200 head from the week prior.

Online, at AuctionsPlus, 18,982 head were yarded, up 9% on the prior week, with clearance rates of 100% for steers and heifers under 200kg, compared to the overall clearance rate of 65%, reflecting high demand for lines of light cattle.

Slaughter numbers for last week were not released due to MLA not being able to collect a full representative sample for the week.

Given JBS plants remained open and operating all of last week, it can be assumed though that when and if the information becomes available,  the slaughter figure will most likely hovered around the around the 110,000 head mark or higher, given that the week prior cattle prices held up well.  JBS plants are expected to resume their kill operations in most plants on Monday or Tuesday next week.

Data release delays on the EYCI have occurred this week, but as of Wednesday the 2nd June, the EYCI last count stood at 889ȼ/kg cwt, only down a smidgen from the week prior. On the categories data, which has also been subject to delayed release, the highlights are heavy steer prices lifting 7ȼ (2%) to reach 395ȼ/kg and vealers pushing up 14ȼ (3%) to 521ȼ/kg lwt.

The Aussie dollar weakened 0.7%, to close at 0.766US, as strong data came out of the US, with manufacturing input prices, services costs, employment and jobless claims all beating general market expectations. There is an expectation that non-farm payroll metrics could see a significant rise when the data comes off, and spark higher potential for the US fed to taper down the pace of their quantitative easing (debt buying) program, which will lead to higher US interest rates, and a stronger US dollar.

The 90CL frozen cow price just keeps rising on the back of a shortage of lean beef in the USA, low US grinding meat import volumes; and a depreciation of the Aussie dollar, coupled with continuing labour shortages as workers shun the beef plants. 90CL rose 11ȼ(2%) to 761ȼ/kg cwt for the week.

With JBS expected to come back online early next week, there is potential that slaughter may see a bit of a spike as the plants play catchup to fill committed orders, if they can find the staff, which will support the market. With the tailwind of cash from a good season behind them, and the confidence of plenty of grass still available in the paddock, no producers are likely to be rushing to turn off cattle in a hurry. This should see the tight supply situation maintained, so we may be able to reasonably expect another pleasing week of attractive prices coming up.

The rainfall situation for the week ahead is also pleasing, with 25-50mm expected to be delivered down through NSW and VIC, and the new BOM 3 month outlook for June to August has the majority of eastern Australia, particularly NSW and QLD tipped to have an >80% chance of above-median rainfall. 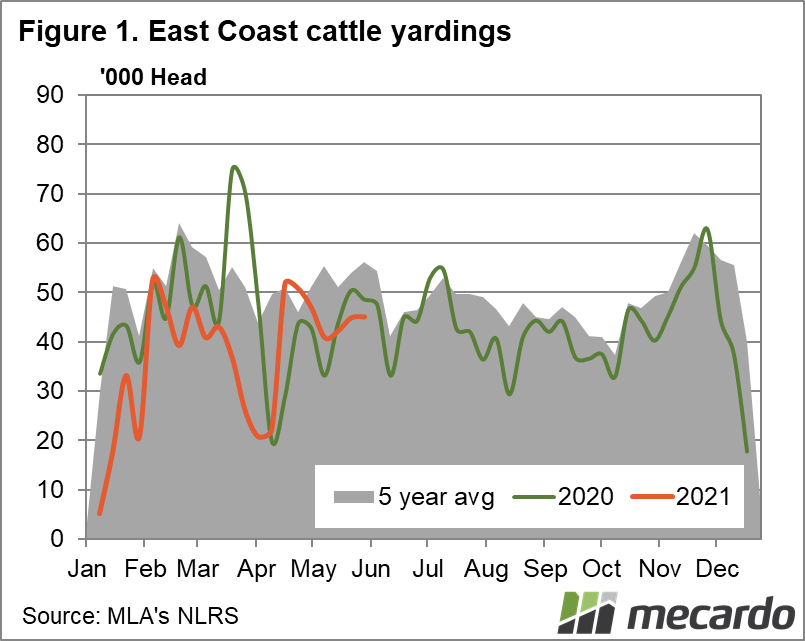 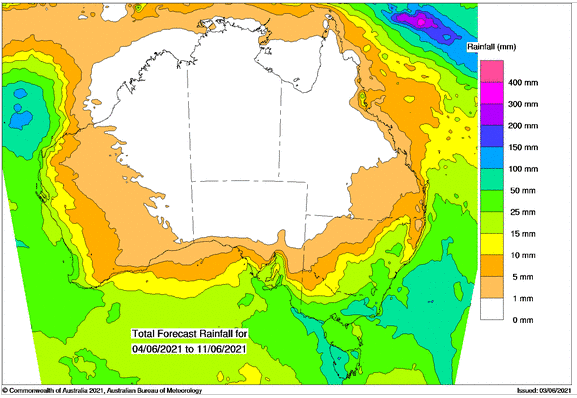 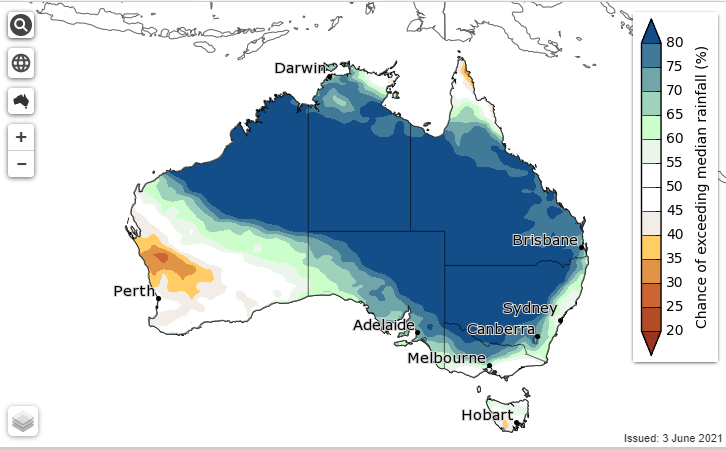