At the risk of flogging a subject to death Mecardo has another look at crossbred wool prices this week, in relation to acrylic staple fibre prices. Our wool grower compatriots on the other side of the Pacific Ocean have an interest in this topic as a lot of their production is within this category.

The change in the crossbred wool market from flying high (2011 -2019) to desperation (2021) is both fascinating and somewhat frightening.  Compared to merino production, the supply of crossbred wool in Australia has been relatively stable in recent decades. It certainly has not increased. As usual the production trends seen in Australia are reflected in the other major wool production countries. This means the dramatic drop in price has been driven by changes in demand.

In Figure 2 the price series from Figure 1 have been reconfigured, using their average price for 1998 and 1999 (an arbitrary period chosen because most apparel fibre prices were low in this period), as a base. Figure 2 shows the acrylic prices recovered from the late 1990s extended period of depressed apparel fibre prices earlier than the 28 MPG, which only caught up in 2011. Usually the two fibres follow similar cycles and trends but from early 2020, when the effect of the pandemic began, they parted ways. The acrylic price has returned to full value while the 28 MPG has fallen to extraordinarily low levels. The question is, will the two series start to move in synch again and if so, when?

Figure 3 shows the 28 MPG in US dollar terms (as in Figure 1) along with the difference or spread in price between the 28 MPG and the acrylic staple fibre. Prior to late 2020, a difference in price of US100 cents was generally the minimum, briefly exceeded only in early 1991 at the collapse of the Reserve Price Scheme. The 28 MPG fell to around US100 cents above the acrylic price in the early 1990s, 1999-2000, 2008 and 2010 and again in early 2021. At that point history suggested the 28 MPG would find some support, especially given the relative strength of the acrylic price.

History had other ideas, with the 28 MPG trading slightly below the acrylic fibre price in recent months. The hope is that such a low relative price will encourage enough new demand to lift prices.

Producers of crossbred wool are hoping that the saying, “nothing cures low prices like low prices”, works it magic for this section of the greasy wool market. 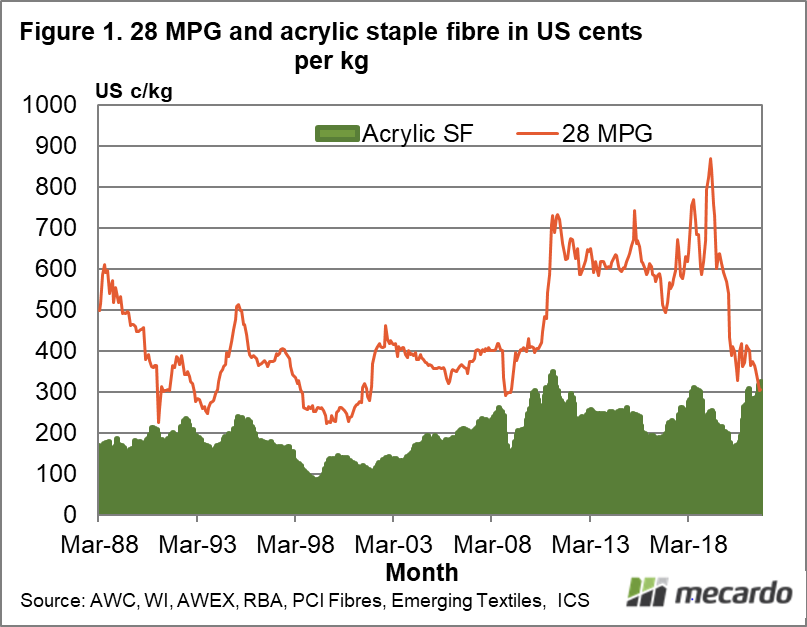