This article follows on from the recent look at the Merino Dark and Medullated Fibre Risk (DMFR) Scheme which operates in the Australian greasy wool auction system. The idea behind the scheme was to help focus the industry on producing apparel wool suitable for use in white and pastel shade fabrics, allowing the supply chain to identify Merino wool which presented a higher risk of dark fibres.

There is much that goes on in the auction system which is not readily acknowledged or understood by other parts of the supply chain from wool growers through to downstream mills. It would be fair to say the DMFR scheme is a good example, although it is not perfect as there is a large proportion of Merino fleece which is sold without a rating (see last week’s article). A very limited survey of exporters by the writer, asking whether the DMFR rating was included in consignment specifications, indicated that it is not used that much except occasionally as an extra layer of insurance of wool quality.

A DMFR rating of 1 and 2 was originally designed to flag Merino fleece wool suitable for whites and pastel shades. The original question which sparked this analysis was whether there was a premium for wool sold which was crutched within three months of shearing (DMFR rating 1). Figure 1 shows a comparison between Merino fleece with a DMFR rating of 2 (crutched but not within three months of shearing) to 1 for 70-95 mm greasy staple length, in eastern Australia and with a high staple strength of 38 to 48 N/ktx in the 2020-21 season. The comparison runs along half micron increments from 15 to 23 micron, and it would be fair to say it is inconclusive. While a rating of 2 flags a slightly higher risk of dark fibres, it is still within acceptable tolerances so little price difference between the two ratings is not unexpected.

The second comparison shown in this article compares Merino fleece with a DMFR rating of 4 (sheep not crutched) compared to a rating of 1. Figure 2, which shows this second comparison, reveals a more consistent discount across most micron categories. This initial type of analysis indicates a discount of 1-2% seems to apply to non-crutched Merino fleece with a DMFR rating of 4. It is an interesting result and perhaps this is where the extra layer of quality insurance is set by the supply chain.

It seems the greasy wool market does not value Merino fleece wool crutched within three months of shearing more highly than other Merino fleece which meets industry standards. It does seem that Merino fleece offered for sale which is from sheep that have not been crutched (DMFR rating of 4) is discounted in the order of 1-2%, although any evidence of stain in the sample box would result in a larger discount. 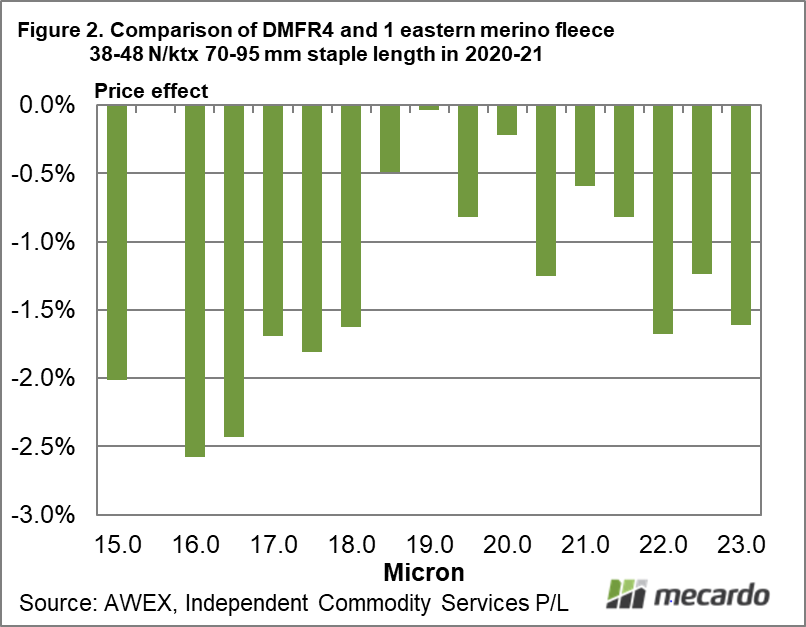