Yardings and slaughter are up and the EYCI climbed again. Heavy steers and vealers are charging ahead but the Australian dollar has stubbornly pushed higher, which is not an ideal situation for export prospects going forward.

East coast yardings leapt forward week on week, with the largest market in the country, QLD leading the charge, jumping skyward by 47%. NSW also came up 43% higher, while VIC increased a more modest 17%. Numbers are about 5% off the levels we saw  a month ago, particularly in NSW.

Overall, a 39% increase in numbers saw 40,732 cattle yarded on the east coast for the week ending 21st August, which is 26% down compared to the same time last year.

Slaughter numbers made progress, lifting 9% from the week prior, regaining some of the lost ground suffered in last weeks steep plunge. Again, QLD led the increase, up 25% on last week, while VIC backed off 7%, and NSW retreated marginally by 2%.  A total of 106,674 cattle were processed, which is down 29% compared to the same time in 2019.

The Eastern Young Cattle Indicator (EYCI) just keeps on rising – up another 1.3% on the prior week, settling at 788¢/kg cwt. Over the last month, it has increased around 5%. On the categories this week, restockers posted respectable gains, but heavy steers and vealers dominated, advancing strongly, while processors, particularly older animals went the other way and lost ground.

The 90CL Frozen Cow price continues to stand its ground against the persistently strong dollar, dipping marginally by 1¢ to settle at 677¢/ kg. In what is not particularly fantastic news though, the aussie dollar surged forward, up 1.4% to at 0.726 US.

The BOM’s outlook for the next week is basically dry as a bone for cattle regions, with little expectation of any rainfall right across the country, giving paddocks a chance to dry out. The drier conditions might see some increases in producer interest in offloading some cattle, which could translate into an increase in yardings, and maybe a little less enthusiasm for restocking. This is tempered however, by the longer-term outlook, with the BOM is predicting a 70% chance of a La Niña event forming in Australia, meaning above-average rainfall for most of the country in the coming year. 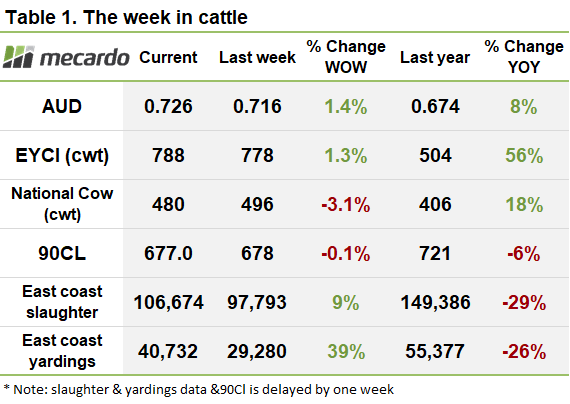 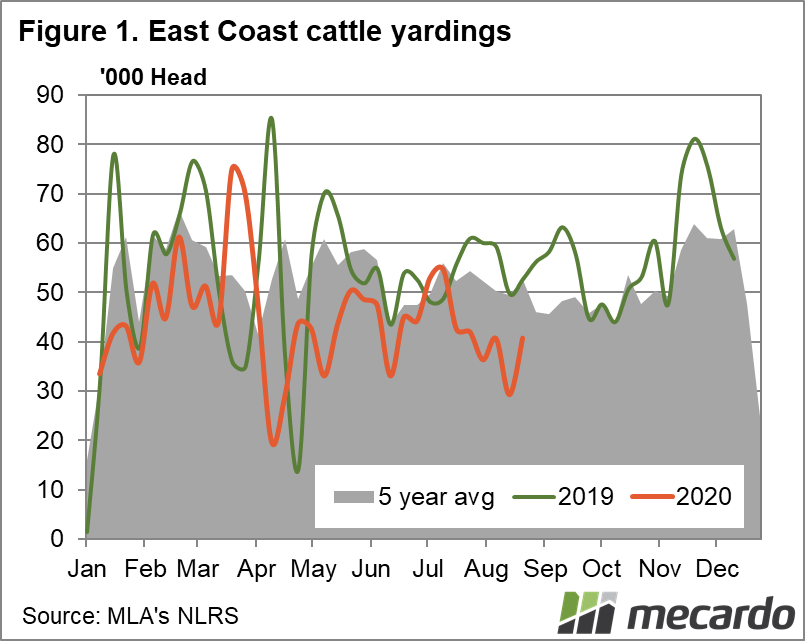