Just where is the beef going?

A couple of weeks ago we looked at some of the data coming through for April and how the early COVID crisis impacted domestic beef consumption and price. This analysis engendered a query from a subscriber as to where our major markets are now, and whether the Chinese suspension of some plants is impacting export flows.

The Chinese suspension of beef exports from four Australian processing plants was effective from the 12th of May.  The suspension is yet to be lifted, and the general expectation was that it would have some impact on export flows to China.

We have the export data for May and despite the suspension being in place for more than half the month, the impact on exports seems to have been minimal.  Figure 1 shows that Australia exported 24,300 tonnes of beef to China in May, a slight increase on April and on May 2019.  In fact, China was our biggest beef export market in May, edging out Japan by 850 tonnes.

The beef industries reliance on China as a major beef market has grown in a couple of major spurts over the last ten years.  Figure 2 shows the share that each of our major markets consumes annually.

In 2013 China lifted from importing very little Australian beef, to become a major market. A second surge in demand from China came last year, assisted by the African Swine Fever outbreak. For the year to date, China isn’t quite our biggest export market, but it’s not far off.

Despite falling in terms of market share, the domestic market remains the largest consumer of Australian beef.  The uptick this year is due to tighter cattle supply. Domestic beef consumption doesn’t move up and down too rapidly, so when cattle supply is tight, a larger proportion is consumed domestically.

Australia’s other major beef markets have been relatively stable over the years.  Japan, South Korea and the US have relatively steady demand for Australian beef, and even in these COVID times, the changes in export volumes look to be more due to tight supply, rather than weakening demand.

Figure 3 shows the export value per kilogram shipped to our three major export markets (up to April), and it bounces around a lot. We can see however that all major export markets tend to trend together, and that China and the US have been very strong in price early in 2020.

Even compared to two years ago, the Australian beef industry is more exposed to Chinese trade issues. The good news is that it seems the suspensions on four processors haven’t impacted volumes going to China, but we’ll have to wait a little while to see if prices have been affected.

Additionally, Australia’s other beef markets remain strong. We managed to achieve the previous record cattle prices back in 2016-17 when China was only taking 7.5% of our beef production.  As such the market is more likely to be driven by the ensuing tight supply rather than trade issues. 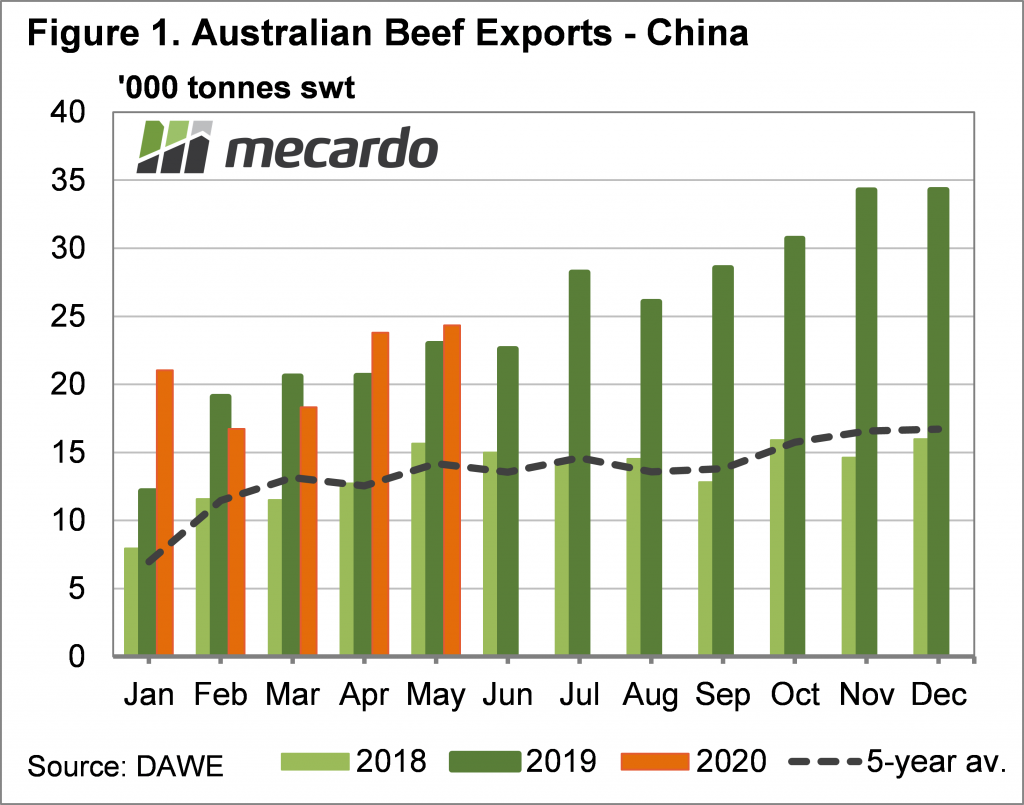 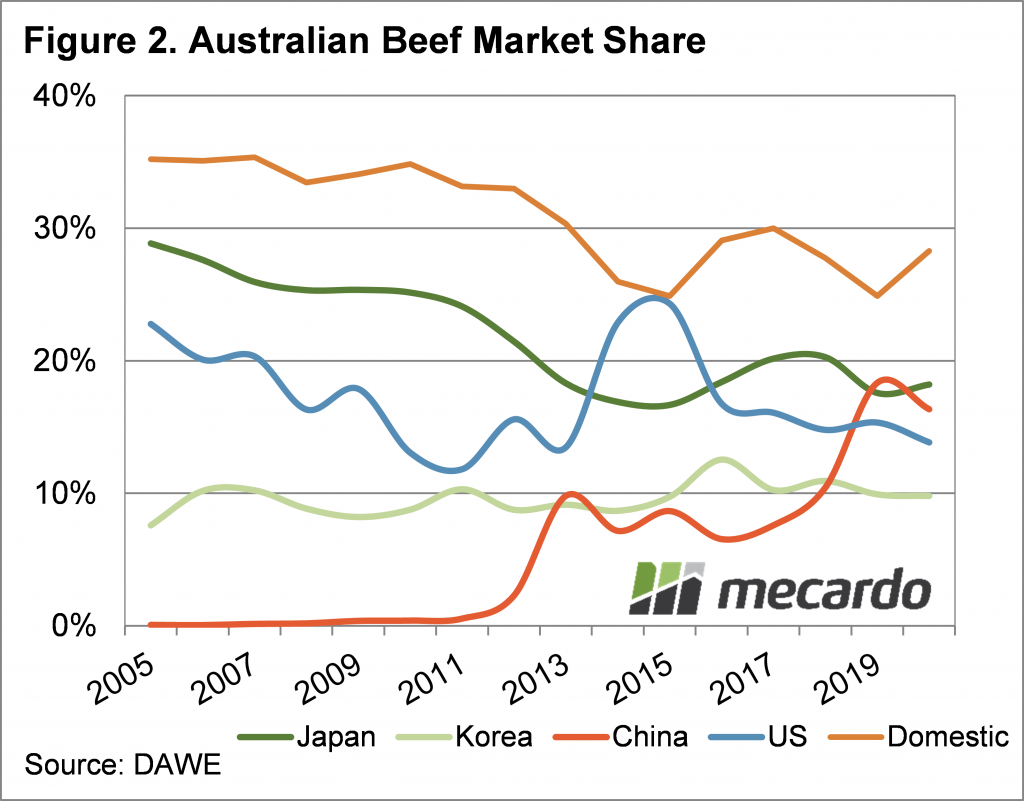 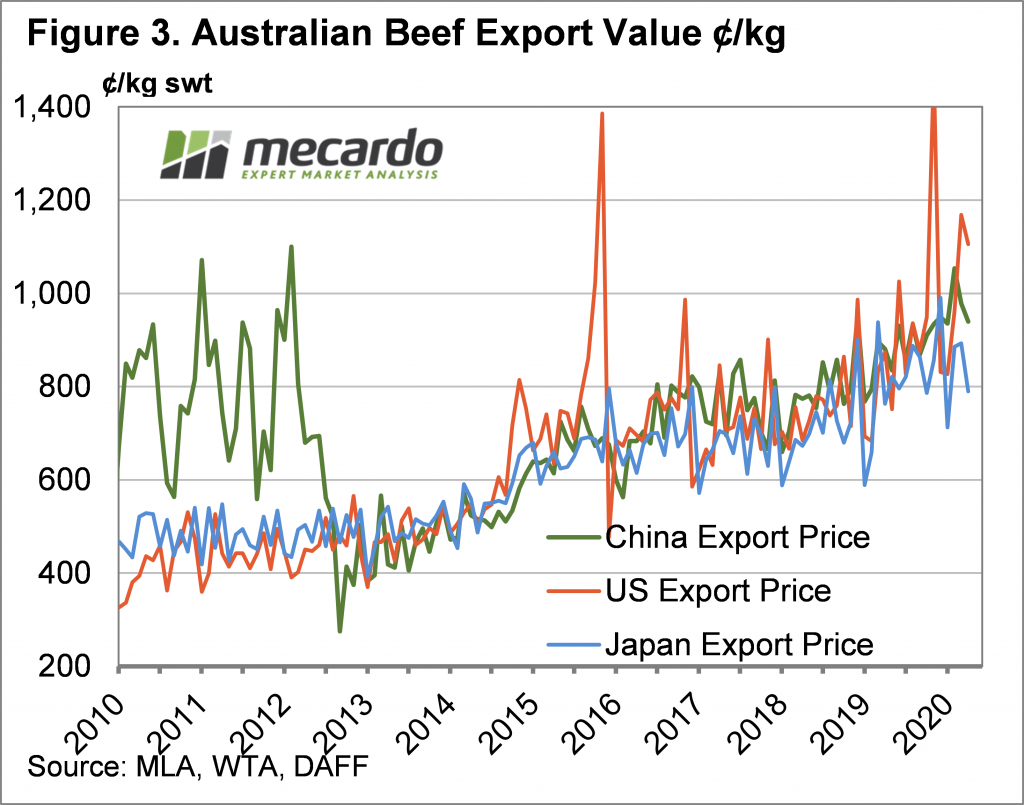